I plan to get the videogame industry drunk and smudge its eyeliner.

Cuddle up in a smoky corner, navigate the rituals of words and glances and body language, get a suggestive glimpse of its black stocking tops. Reach that moment when videogames and I hover, lips apart, a vast possibility between us ...

Until Ken Levine rips off his wig and I'm left with scars in my eye sockets.

But someone needs to send out a search party for sex appeal. 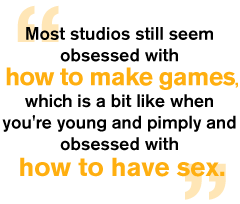 Human relationships and intimacy are still a videogame flyover state. Most studios still seem obsessed with how to make games, which is a bit like when you're young and pimply and obsessed with how to have sex. There can be more to it all than mechanics and wobbly bits and stickiness, more ability to suggest than just show.

You up for a wander in the shadows?

Dreams in the Dark
To mutilate something a judge once said, sexy's tough to define but I know it when I see it. When I was 13, that meant Phoebe Cates taking off her top in Fast Times at Ridgemont High.

Those poolside love globes made quite an impression - a freeze frame moment that seemed like the sexiest thing in the universe. I had no thought that behind this lay an hour's worth of cinematic buildup; they were there and that was it.

Phoebe, bless her chesticles, was the gateway drug into a new world.

Kim Basinger in L.A. Confidential - imitating 1940s siren Veronica Lake - led me back to an earlier, subtler era. It's amazing what films of that time can do with personality, glances and chemistry. From Rita Hayworth in Blood and Sand to Sophia Loren playing off Anthony Perkins, the in-your-face approach would be like a bazooka at a chocolate tasting.

When I was 24, Buffy and Spike had dead person/vampire killer demolition sex. It was violent. It was obscene. It had been building for three years and was rooted in angry self-destruction. Wrecking a house with lovemaking was fun. The savagery of unleashed desire was sexy as all hell.

Buildup. Tension. Suggestion. Desire. At their best, film and TV can run their hands all over your mind.

And then there's Monica Bellucci every time she breathes.

Her silhouette, her attitude, her voice. The way she moves onscreen. You can disagree if you like or substitute others, but here, to me, is a movie star in the purest sense: someone you can't take your eyes off of.