Hardcore gamers are notoriously fickle creatures, but it's hard to imagine that anyone who can survive for days on end busting virtual caps in monsters, robots and myriad other opponents wouldn't enjoy immersing themselves even deeper into the first-person shooter experience. They thirst for any opportunity to make their preferred brand of fantastic violence even more realistic, short of jumping through the screen and personally facing off against a two-headed zombie minotaur wielding an axe made of human bones.

But this time, a 46-year-old vascular surgeon from Redmond, WA has the answer to their prayers.

When he's not scrubbing for surgery or otherwise busy with his private medical practice, Dr. Mark Ombrellaro heads up a company that's paving the way for a generation of players to experience gaming in a whole new way. In 2006, he formed TN Games - the gaming branch of Touch Networks, which he founded in 2000 - in order to launch a series of cutting-edge videogame accessories that stimulate the player's sense of touch. 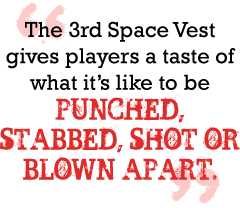 The company's first product is turning more than a few heads in the industry. The 3rd Space Vest made its debut during the 2007 holiday season and is steadily building a dedicated user base. The 3rd Space Vest gives players a taste of what it's like to be punched, stabbed, shot or blown apart - without the unfortunate fatal side-effects associated with the real deal - inside their favorite first-person shooter. Using a series of strategically-placed pneumatic cells located over vital organs, the vest responds to the action on-screen by delivering a swift jab to a player's corresponding anatomy whenever he's hit. It doesn't dish out actual pain, per se, but you'll certainly feel it every time foes land a blow.

From Health to "Hell Yeah"
Oddly enough, the vest was originally designed for use in the medical field. In the early 1990s, Ombrellaro was involved in a telehealth project designed to provide healthcare to inmates in a Texas prison via a long-distance AV conferencing system. Despite the use of high-tech equipment, the assistance of an on-site nurse located in the patient's cell was required. The doctor could see and hear the patient, but they still couldn't rely on physical touch to help make his diagnosis.

"The nurse would sit with the prisoner and do the physical part, but you're still one step removed from them," says Ombrellaro. "That still remains a problem with telehealth. With a remote environment type of interaction you can see and talk to someone, but you can't do a hands-on exam."

Ombrellaro came up with the idea of using a wearable interface on the patient's side that would communicate with a tactile hand controlled by the doctor remotely. The garment would allow the physician to remotely apply pressure to the patient's body while simultaneously reading the counter resistance to assist with diagnoses, he says. A few sketch designs on the concept and several years of technological advances later, the time was right to put his idea into motion.