Life must be hard for the monkey who sniffed his finger. He didn't know he was on camera. Didn't know, when he happened to have an itch on his butt, he'd become the latest internet video sensation. Didn't know that curiosity killed not just the cat, but his privacy. When he raised that finger to his nose, his backward tumble represented the fall of common decency, the decline of civilization and the subsequent dawning of the age of internet video fame. Poor monkey. Poor world. 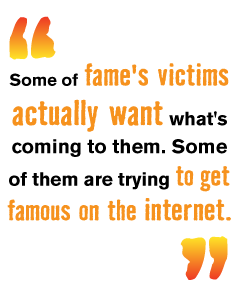 But not everyone in stardom's path is as innocent, perhaps victimized, as the monkey with a finger in his butt. Some of fame's victims actually want what's coming to them. Some of them are trying to get famous on the internet.

"I'd be lying if I said I didn't want to be well known," says Ben "Yahtzee" Croshaw. Late last year, following a breakup, Croshaw vented his ire on the internet, posting a scathing video review of Fable on YouTube. To date, over 500,000 people have viewed that video, including employees of this publication, who subsequently hired him and developed his ramblings into Zero Punctuation, now one of the most popular videogame reviews on the internet.

"Since I long ago decided that I hated kids and never wanted to have them, my reproductive instinct has transferred to my creativity," says Croshaw. "I've always wanted to create works that will ensure I'm remembered after I die. I don't think I've done that yet, though."

That last part may not be entirely true. In addition to the reviews on Zero Punctuation, - which are viewed, on average, by about 1.5 million people - Croshaw also makes his own games, writes a monthly column at PC Gamer and has started doing contract work, theoretically a launching pad to making his own major-label games. "Which is handy," says Croshaw, "because that's really what I want to do with my life." All of which would never have happened without achieving fame on YouTube.

YouTube is rapidly becoming the fame engine du jour for aspiring creative talent. Whereas, in a bygone era, a ticket to stardom might have literally been a ticket, by bus, train or airplane, to Hollywood, California, USA, the home of all things fame-related, the internet - and YouTube - have made fame a part of the global economy. Croshaw is the perfect example; he's not even from America, and lives a world away, in Australia.

On YouTube, you don't have to live in L.A., don't have to take a turn on the casting couch; you just have to have talent. Instead of a television executive deciding your fate, it's the entire world. Never before has the line between what the audience wants and what they get been so direct. Want to see a monkey sniff his butt? It's out there - you just have to find it. Want to know how many people enjoy watching a monkey sniff his butt? That's out there, too. Just read the numbers. Predicting a hit used to involve wizardry and guesswork. Now it's simply point and click.