We've all heard it at some point in our lives, either from an exasperated parent or a nannying cartoon series determined to impart some kind of moral guidance: "Finish what you started."

It's decent advice when applied to many things - higher education, great literature, shaving, cheesecake. But how does it apply to videogames? If the game is doing its job properly, you should be traveling toward completion without even being conscious of it, whizzing along on a pleasure cruise of intriguing narrative and intuitive gameplay, any barrier between player, character and progression melting away like blowtorched butter.

A good example is Ico, the mute poster-child of arthouse gaming. This existential quest has such an absorbing, heartstring-plucking storyline that to not see it through to the finale would be like beginning to read a fairytale to your 6-year-old niece, then abruptly slamming the book shut when the princess is still deep in her enchanted slumber.

But while Ico leads the player deftly toward a conclusion as satisfying as it is ambiguous, many other games stumble drunkenly toward their climax. Random difficulty spikes, murderous end-of-level bosses, poorly chosen save points, illogical puzzles, aimless narrative ... all of these bleed enjoyment from the experience. 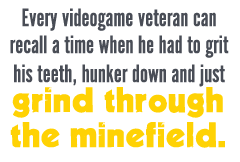 Every videogame veteran can recall a time when he had to grit his teeth, hunker down and just grind through the minefield, whether it was the Library in the original Halo or the twitchy session of hide'n'seek with chainsaw-wielding dimbulb Piggsy in Manhunt. "Continue?" Yes. "Restart from last save point?" Definitely. "Sure you want to keep going despite the fact that this really isn't doing either of us any favors?" Exactamundo.

Most gamers like to be challenged, and there is a certain grim satisfaction to be had from beating a level that once seemed impossible. Any psychological scars from the experience can now be worn as badges of honor, particularly in the look-at-me age of Xbox 360 Achievements. The world can see what you've been through, and can choose to applaud or shudder in response. You completed Gears of War on "Insane" difficulty? High five! You unlocked the Burnout Paradise Tribal Special Hot Rod that looks as if it should grace an Aerosmith album cover? Way to go!

But there's a whole caste of forgotten PS2 games that offered no tangible reward for brawling your way through to the credits. Finishing them meant no playground bragging rights, no gameplay-reinvigorating unlockables, not even a toe-tapping song. And yet, for a few years, these were exactly the games that took over my existence, deadening the joy centers of my brain, curdling my naturally sunny disposition and methodically asphyxiating my social life.

Forget the exclusive gentleman's club of elite PS2 titles like Grand Theft Auto: Vice City or God of War, games that are not only enjoyable to play but fun to discuss with colleagues and co-workers. I'm talking about such unheralded, misremembered non-hits as Total Overdose, Cold Winter, The Suffering, Psi-Ops: The Mindgate Conspiracy, Spyhunter 2 and Urban Chaos: Riot Response, all games I burrowed away at until they were done, finished, kaput.