D&D Against Time
In a few weeks, Hasbro will release the 4th Edition of Dungeons & Dragons, the tabletop roleplaying game that started it all 34 years ago. Because geeks now rule the world, and D&D is the nec plus ultra of geekdom, it pays to give the old game its due. One of the big controversies in the development of new D&D is the extent to which videogames, like World of Warcraft, have influenced its design. The important question about tabletop RPGs and MMOGs is not about influence, but essential difference. What distinguishes the two great acronyms of gaming? Two words: Ancient Greece.

Plato and Aristotle could never have plumbed the depths of WoW for obvious reasons: no electricity, much less computers. The reason the two great philosophers of antiquity couldn't have played a game like D&D is less clear. 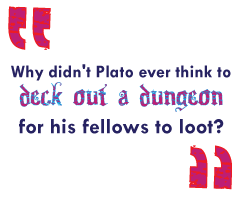 Pong, released in 1972, relied on cutting-edge electronics. Dungeons & Dragons, which appeared two years later, employed technologies that had existed for thousands of years. The odd-shaped dice used to play original D&D - the pyramids, the icosahedrons, the strange gear of so many roleplaying games - are the five Platonic solids. The Greeks had advanced math, writing, drama, myth and lots of leisure time - not to mention an academy at Athens loaded with nerds. So why didn't Plato ever think to deck out a dungeon for his fellows to loot?

From ancient Babylon to post-WWII Europe, nobody thought of such a thing as roleplaying games, though the materials existed for making them. No one conceived of Dungeons & Dragons until the American Midwest in the early '70s. Why is that? Why would it take a guy from Minnesota and a guy from Wisconsin to invent D&D just before the Age of Disco? What makes D&D so modern?

This question has many answers, but for now let's look at just a couple: the two craziest things about Dungeons & Dragons.

Wager Your Darlings
Dungeons & Dragons asks players to make up characters and then gamble with them. Suppose I create a character called Black Leaf. She's a cute but histrionic thief with shaggy hair who wears sleeveless tunics to look tough. When I put her into play, she becomes my stake in the game. If I make bad choices or have bad luck with the dice, she could die. Even apart from the dice, as the game progresses, she'll change in unpredictable ways. I don't really have control over the character I invented.

Yet D&D rewards a well-developed character. It's a game of economics. Players invest in their creations, then risk them in further adventures in order to improve them again. These improvements could be aesthetic or mechanical, a development in personality or power - or both. If Black Leaf finds a magic rope in a treasure hoard, she can use it to get more treasure or to express herself through rope-tricks. Either way, I'm accumulating an ever-more-valuable, imaginary stake in an actual gamble. Why does D&D work this way?