The three most oft-repeated phrases I hear over any Thanksgiving celebration with my family are, in order:

Like any proud (Filipino) American family, we give thanks that we may eat well, drink well and tear up the local Counter-Strike server. While the older folks gather around the karaoke machine and croon the same '80s pop tunes every year, my middle school-aged cousins cluster around our motley collection of PCs, and without fail, "Boom, headshot!" resounds throughout the house. This is because, from gamer geeks in the Netherlands to my 12-year-old cousin in California to my college roommates who got me hooked on the show three years ago, everyone watches Pure Pwnage. 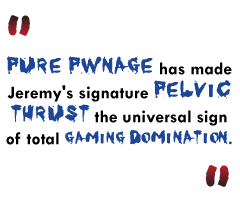 Pure Pwnage (pronounced "ownage") began as nothing more than a clip for Geoff Lapaire, a Canadian graduate student in physics, to test out some new video editing software. The clip in question wasn't just any stock footage, however; it starred budding stand-up comedian and fellow hardcore gamer Jarett Cale, newly addicted to Command and Conquer: Generals - Zero Hour, and his exaggerated performance became the basis of one of the internet's biggest independent media successes. Cale plays Jeremy, a capital-P Pro Gamer, and together with Lapaire as his brother Kyle, he leads the audience through a half-fantastic, half-realistic look at the life of a pro gamer. Now, four years and 16 episodes later, Pure Pwnage is a full-time enterprise with a worldwide fan base in the millions, an adoring online community and a flawless grasp of "gamer cool" that has won them the hearts and minds of the hardcore gaming audience. For better or for worse, Pure Pwnage has made Jeremy's signature pelvic thrust the universal sign of total gaming domination.

So how do they do it? What could my young cousins and college roommates have in common with millions of others across the world?