We're living in the Age of the Genre. Superhero movies are as thick as maple leaves on the ground after an October thunderstorm. We're getting spear-and-sandal epics, giant, city-destroying monsters, zombies, zombies and more zombies. On the gaming front, Telltale Games is putting out some of the best point-and-click adventure games I've played in years; we got cowboys in Call of Juarez, a campy '50s UFO invasion in Destroy All Humans, and kung-fu bad cop Tequila in Stranglehold. And, of course, Dead Rising and Resident Evil 4 gave us yet more zombies. It all begs the question: Is the culture machine's newfound reliance on established genres just a fad, or a taste of things to come? 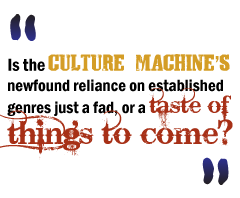 Colin Geddes was the organizer of Kung Fu Fridays at the Royal Cinema in Toronto until the event closed in 2006. He has been the Program Director for the Toronto International Film Festival's Midnight Madness program since 1997, bringing us the likes of Six-String Samurai, Gamera 3: Revenge of Iris, Ju-on: The Grudge and Hostel to festival attendees. And his independent film distribution company Ultra 8 Pictures has brought many unique films to a wider audience. The Escapist sat down with Geddes to get his take on the trends shaping the film and gaming industries.

The Escapist: Genre films are on the rise. A quick search of the Internet Movie Database lists dozens of zombie movies in just the last couple of years. As a fan who's made it your life's work, how do you explain this burst of activity?

Colin Geddes: OK, first we're going to have to work on your definition. What do you mean when you say "genre"? Because "genre" is a word that is thrown around a lot, and it is thrown around, usually, totally wrong. "Genre" is a category. So when you say "genre films," or "genre media," you're talking about everything. You're talking about crime films, romance films, musicals, everything. So are you asking about action genre, horror genre? You've got to be specific when you use the word "genre."

CG: OK, so using horror movies and I guess comic-book fantasy films would be the other genre. So, back then to your question: The thing with horror films ... there is a misconception that there is a new popularity of horror films. Horror films have always been popular. If we're talking about cinema history, there has never really been a period where horror films have fallen out of favor. Musicals may come and go, westerns may come and go, horror films there is always an audience for. As far as particular types of horror films; maybe they peak up and down. You have the introduction of slasher films in the 1980s, and then that petered out. Then they kind of got reinvented with Scream, and it happened again. But it is interesting that you always get people in the popular media who will perk up and say, "Oh, horror is popular again because of Scream." It's always been popular.