As we look back on a decade, it should be bloody awful. Tacky and trite and embarrassing and laughable and unfashionable; downright bloody awful in every sense. But in the most wonderful way, of course.

It might be mortifying when a girlfriend flicks through a photo album of your family's holiday snaps from 1984, wherein you appear to be balancing a small dog on your head and wearing a brown and orange Draylon shirt with a collar that could take you hang gliding. But it's proof that the '80s, in this example, made a sincere and concerted effort to break from tradition and secure itself a notable, if tasteless, footnote in history. 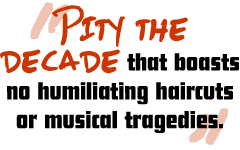 Pity the decade that boasts no humiliating haircuts or musical tragedies. Sure, things happen in the news - wars come and go, disasters wipe out corners of the globe and airplanes explode, but it's the fashions, TV shows and trends that we remember. Not to suggest this is a world where superficiality is king, but an optimistic glance toward the past is generally preferable. Remembering the 1980s for The A-Team rather than Margaret Thatcher makes good psychological sense and helps keep the suicide rate among the working classes under control.

How, then, in the years to come, will we remember this decade and the trends that define it? The last eight or so years have been spent in a decadent and meticulous revival of decades past, so what will there be to celebrate? What about the dawn of the new millennium, if anything, will mortify us when the digital photo albums are brought out in 2030?

While the last century was quite fortunate in that most every decade differentiated itself admirably from the previous one, things began to falter as the fluorescent '80s drew to a close. The '90s bore the burden of a half century of teeny bopping, disco dancing, punk rocking, jive talking gaudiness, and the children of that decade chose to be depressingly discerning. The fools refused to sacrifice themselves on the ostentatious altar of bad taste, and while this might make holiday photos far more tolerable 10 years hence, an entire decade now goes unrecognized.

No one ever says, "Oh my god. That's, like, soooo '90s." And why would you? People were well dressed, comedy was intelligent, the general populous worked hard (and smart), music was tuneful; it was boring as fuck. Not so much as a Fablon-covered radio alarm clock or turtleneck leather waistcoat got past the 1990s' Fashion Police. The knock-on effect of this yawn-inducing decade is that the 2000s have had nothing to rebel against. It's as though the Good Taste-O-Meter was reset at the beginning of the millennium.

The extremity of this non-identity is quite profound. As I write this article, I find myself wondering how our current decade is even denominated. The '70s, the '80s, the '90s, the ... Zeroes? The Aughts? The 2000s? Who knows, and more poignantly, who cares?