The first two definitions, the Zeroes and Aughts, strike a particularly ironic accord with this lost decade. Not that it's been a miserable time - I've quite enjoyed most of it - but contemporary culture's revivalist impulses have been stretched thin. Nostalgia has become emotional gold. All the research has been done, and the development left to distill for at least 20 years - all the entertainment industry had to do was repackage it, and the vogue of the Aughts meant we'd lap it up. Movies, TV, games and fashions - everything that's worth remembering about a decade long gone has been recycled, rebranded and re-celebrated to feed the melancholy desires of the new millennium's first 10 years.

It's been pretty damn entertaining. Wearing a T-shirt with a ZX Spectrum on it - and actually looking good - is a thing of beauty for those of us who were persecuted as nerds when computers first hit store shelves. To see King Kong climb a building without looking like a pair of cashmere gloves with a blonde strapped to them was certainly not a bad thing. The Hoff regained his credibility overnight and the two Georges (Lucas and Romero) rightly decided that audiences were primed for them to return to the director's chair.

Even the millions of dollars poured into next-generation gaming consoles included an offset lynchpin that fixed them firmly to the past. This retro gaming angle has provided a brilliant financial safety net for the new systems. Maybe the vast array of classic games is money for old rope, but it's a reassurance that the people with their hands on their wallets have a nostalgic interest in testing out a new system instead of blowing the dust off a 25-year-old computer they've got squirreled away in the attic. 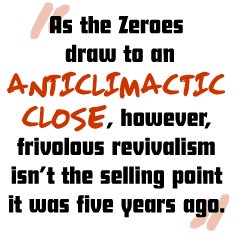 As the Zeroes draw to an anticlimactic close, however, frivolous revivalism isn't the selling point it was five years ago. Just as it's historically unfair to throw a Rubik's Cube, a full-priced CD, a B.A. Baracus lunchbox and a VCR the size of a cast iron radiator into a box and label it "The '80s," the vast nostalgic experiment that is the 2000s is also subject to drifting opinions. Lately, when we hear of another remake in the works - regardless of the medium - a chorus of knowing groans can generally be heard echoing through the entertainment industries.

The massive interest in revivalism has reached the saturation point. There's nothing left to revive, so the nostalgia machine seems to be returning to the beginning of the track to go around again. Worse still, these increasingly strained attempts to reawaken our childhood memories are beginning to introduce defects into that valuable and hallowed substance. When every old idea has been plundered, pillaged and raped, perhaps the only remaining course of action is to burn it down and be done with it.

Take My Money: Rockin' The 80s TrishaHershberger 5 Comments
Comments on