With the end of the decade in sight, a distinct change can be felt in the melancholic breeze. Selling us another Star Wars film or Mario game doesn't stir up nostalgia the same as it did five years ago. Another old game given a 'next gen' coat of paint seems stale and uninspired. It's no one's fault, but the consumer has always reserved the right to act irrationally fickle, and no trend lasts forever - we make sure of that. What's interesting, however, is the way in which the revivalist craze is mutating. Fed up with watered down nostalgia (and suffering from a creeping awareness that maybe things weren't quite so brilliant and different when we were young) people are turning to their own hands, once again, to bring them something new.

My mother would often tell how women of her generation would make their own clothes to go nightclubbing in during the '50s and '60s. This wasn't because they were disenchanted by poor-quality, high-cost designer fashions like we are today - it was simply the only affordable way to stay current with the styles of the era. My grandmother would explain how that war revolutionized the way women dressed - working in munitions factories made it acceptable for them to don shirts and trousers for the first time in British history. The circumstances might be quite different in the 2000s, but the results are strikingly similar.

Fashions, whether in filmmaking, game development or clothing, are being reclaimed by ordinary people. The best part is, our recent fixation with revivalism has prepared us to learn very quickly from the decades that have previously benefited from DIY entertainment. The independent filmmaking in the '30s, the adoption of completely new fashion concepts in the '40s, the home industry of the '60s, the technological striving of the '70s and the self-indulgent experimentation of the '80s are all areas of accessible inspiration on which we can now draw.

We've tried reviving these eras, often all at once, and while it's provided an enjoyable distraction, verbatim regurgitation doesn't have much staying power. But it has reignited our desire to create once again. As shops become simultaneously flooded with astronomically-priced designer clothing and a deluge of "fast fashion" (both of which are probably manufactured in the same Chinese sweat shops), the trend-setters are shunning the corporations and taking to their own sewing machines instead.

Quality, low-budget independent movies are dominating film festivals and tearing up the charts. Gamers are once again creating new and original titles in their bedrooms. All of this is born from the realization that "the past" is precisely that. 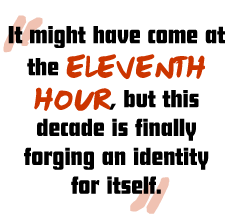 It might have come at the eleventh hour, but this decade is finally forging an identity for itself. Five years ago, that identity seemed destined to be remembered as neo-revivalism, the plagiarist years or the decade when imagination died - and in many respects that's probably how the cynical will look back at it. But the Zeroes are also incubating a new and independent approach to culture; not so much a silent revolution against the corporate-run world as a growing indifference to it. It's an attitude that the global mega-corporations will have a far greater time combating than consumer insurrection.

These final years of the 2000s are proving to be wonderfully inspirational. A return to self for the people who've run out of nostalgic steam; an exciting reawakening of the independent spirit, and the beginnings of a much needed and, hopefully, mortifying identity.

Gallery of the Day: 8 Bands You'd Only Know If You Were Alive In The 80s DrStrangelove 26 Comments
Comments on