To know what the end of the world is like one must live through it. - The Atomic Age Opens

Like the man who wears Gucci loafers every day for three decades until they finally come back into style, I've been beating the apocalypse drum my entire life. I held it as a certainty, at some point, the Doomsday Clock would again inch closer to midnight and civilization's imminent demise would reclaim its place at the front of the cultural consciousness. And lo, it has come to pass. 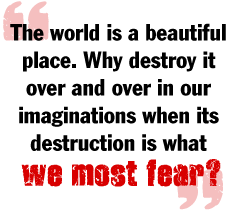 From movies to books to games, stories based on the end of the world have once again, following a brief drought during the 1990s, resurfaced as a major American pastime. What is it, exactly, that prompts our fascination with the end of everything? What makes us fantasize about that which we most fear? Why not watch movies with happy endings, or paint butterflies on the wall, hold our hands over our ears and shout "na-na-na?" The world is a beautiful place. Why destroy it over and over in our imaginations when its destruction is what we most fear?

It's a Small World (Not)
From a storyteller's perspective, the wish to see our celestial vessel obliterated might be based on its size. That annoying Disney song to the contrary, the world is a pretty big place; bigger than we often realize. From billionaire adventurers to World War II airmen to Amazonian wildmen, people get lost in it all the time, in spite of satellite navigation and Google Maps.

In an age when you can plan a route anywhere just by clicking a mouse, when your car can guide you to the nearest Taco Bell and you can't even hide from the law in Mexico, the idea of ever being lost seems almost ridiculous. Yet it happens. Every day, seems like. The world really is that big.

It's also full of stuff. Every single inch has something in it, whether it's a rock, a lizard or a pile of trash left by some idiot slob who can't be bothered to drive all the way to the dump. I was wandering around in the Texas wilderness many years ago, in one of the largest, emptiest states in one of the largest, emptiest nations on the large, empty planet, and as I turned a corner looking for a good-sized bush behind which to pee, I found a diaper. A disposable diaper sitting on the ground, left by some wandering traveler, waiting there for me to discover.

There are a million empty crevices into which a person can fall, and each one contains a bit of trash, or an aviator lost for decades, or an entire civilization lost for generations; a diaper or a diamond waiting to be discovered. It's enough to blow your mind. If you've been tasked with recreating our world in miniature, or creating a simulacrum in the form a videogame, this preponderance of things in a seemingly endless sea of vast, empty spaces is something you might consider the bane of your very existence.

As Warren Spector discussed at GDC 2007, the increase in computing power that game developers have been able to leverage against telling their stories has directly increased the detail they're required to employ when telling them. To create a realistic fight scene in a bar, it's no longer good enough to simply paint a bar background and allow two characters to fight. In today's 3-D, interactive game environments, developers are encouraged to go so far as to individually render each bottle and glass the two characters might stumble into or break during the course of their battle, as well as any characters who might be in the way of falling glass or spilled beer, and then code their reactions as well.