This can be a daunting undertaking, and it's not a new one. Designers have, for years, shied away from telling complex stories requiring more graphical or technical detail than they could manage, and videogame makers aren't alone in this. Playwrights suffer from this malady the most, forced to restrict their storytelling to venues they're able to recreate onstage. Heaven forfend Scene Three take place on a cruise ship, and Scene Four in the Arctic tundra. Not to mention the most complicated part of telling any story is creating a believable world in which your characters fit. How better to avoid the perils of anachronism, of complicated scenery, than to do away with the world entirely? Enter: the Apocalypse.

Apokalyptein
The word "apocalypse" comes from the Greek language, from the word meaning "to uncover what's been concealed." The apocalypse, then, is a revelation, both in the biblical and personal sense. At the end of days all will be revealed, is the thinking. Good will face Evil, the gloves will come off and the Final Battle will occur. Also, a lot of people will die, taking a lot of their crap with them, either blown to dust or buried by the sands of time. What's left will be not only a perfect canvas for writing a story free of extraneous detail, but also for starting over from scratch, building a better society from the ashes of the old. Considering how frequently people complain about the world in which we live, it's a small wonder there aren't more of them actively seeking the apocalypse. 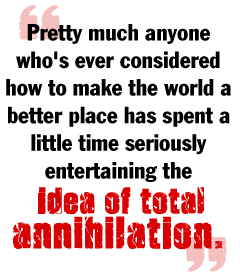 Pretty much anyone who's ever considered how to make the world a better place has spent a little time seriously entertaining the idea of total annihilation. Even God, if the Old Testament is to be believed. After all, if the state of the world - and the people in it - is the problem, then why not wipe the slate clean? Noah, grab your ark. The thought passes once you realize it's completely insane - or you're not omnipotent - but if you're blessed with the gene of sociopathy and you're unable to cope with the world's ills, then sitting around waiting for a catastrophe is probably in your future. If things are truly bleak, apocalypse may be merely another way of making an exit; more dramatic than putting your head in an oven and with less paperwork than buying a gun.

Even if you're not seriously deranged, the thought of dying at the end of the world may be preferable to the thought of surviving it. It's been posited that, in the event of apocalypse, survivors will be subjected to such brutal torments that the living will envy the dead. Cormac McCarthy's award-winning novel, The Road, tells the story of an unnamed man's journey to an unnamed place in the days following an unnamed apocalyptic event. It's a setting so brutally savaged by torments both natural and man-made that fighting to keep setting one foot in front of the other in spite of the horrors encountered along each new stretch of the road becomes the story's main conflict.