Yet, according to David Zuckerman, author of the terrifying book, The Day After World War III, apocalypse may not be the final exit many fear (or hope) it will be. "The people may believe that nuclear war will be the end of the world," he says, "but the government seems not to." Zuckerman's book presents a detailed accounting of the U.S. government's plans for not only surviving a nuclear Armageddon, but also rebuilding the nation afterward. 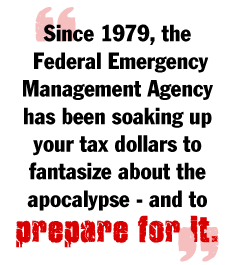 Since 1979, the Federal Emergency Management Agency has been soaking up your tax dollars to fantasize about the apocalypse - and to prepare for it. More specifically, it's been preparing for "after" the event, amassing everything from legal documents, legislative bills and executive orders to blankets, bottled water and opium just in case something goes wrong. Executive Order 12127, signed by President Carter, created FEMA from the ashes of several separate government agencies to hope for the best, plan for the worst and be ready to completely take over all government functions in the event of the unthinkable.

The conviction that the post-nuclear-war world will contain recognizable people capable of engaging in complicated, coordinated activities is the basis upon which the American armed forces make plans for a drawn-out nuclear war that could last for weeks or months in round after round of strike and counterstrike. It is the basis of planning not only of the Federal Emergency Management Agency but also the Treasury, with its position papers on the post-nuclear-war tax system, and the Postal Service, with its plans to distribute emergency change of address cards and forward the mail after a nuclear war.

Billions of dollars worth of industrial metals and other raw materials (including opium) were stored in at least 122 sites around the country by the Federal Emergency Management Agency as part of the National Defense Stockpile. FEMA also encouraged major corporations to build alternate facilities, out of the way of major cities or other target areas, so they might carry on operations in the event of a nuclear attack. Such facilities, like AT&Ts bunker in Netcong, New Jersey, were generally underground and more closely resembled fallout shelters than corporate offices.

Where does that leave us? Storytellers, psychopaths and deranged government employees. Not exactly a party. Where do we fit in?

Harvard psychiatrist John Mack divides people into two camps; the "thinkables" and the "unthinkables." Thinkables are those who believe surviving the apocalypse is not only possible but worthwhile, and thus plan for its aftereffects. He says "the thinkables appear unable to experience, or have found a way not to experience, the terror of the nuclear reality." By contrast, the unthinkables, he says, believe the apocalypse will be so physically and emotionally devastating they see no need to plan for the event, preferring to perish or believing they will regardless.

Mack says unthinkables, unlike thinkables, have been able "to experience directly, or hold emotionally, the reality of the nuclear danger," and as such see the end result of the apocalypse so clearly, or at least the horror of it, that they believe they'll be unable to cope.