The Zombies of Lbhaira
Last summer, in Casablanca, I found zombies in a souk. A souk is a traditional Middle Eastern market of small, closely-packed shops, clustered according to the goods they sell. It's customary to haggle with the proprietors of these shops; argue long enough and they'll serve you mint tea. The Lbhaira souk specializes in used books and pirated accessories. The zombies lay in pirate territory.

The pirates manufacture knock-off backpacks and handbags behind the booksellers' stands, in rows of irregular little workshops. The place looks like a shanty town, with the whole pirate assembly line out in the open in dirt alleys. I watched a boy of 6 or 7 carefully stack wet prints of the Nike swoosh while his father manned a silkscreen press - a heartwarming subject for a Norman Rockwell forgery. The oddity of the enterprise deepened as I came across a macabre artifact: Hanging from a hook in one of the shops was a zombie backpack.

Jamie Hewlett of the Gorillaz designed four zombie-themed backpacks for Eastpak in 2005 through his company, Zombie Flesh Eaters. The "Zombie Attack" model featured a horde of grey and black hands clutching up the bag's white fabric. The pirates rendered the hands in grey and white, probably because they had only black material to work with. For Eastpak to commission a zombie bag series tells us that the zombie craze may have gone too far, but for Moroccan clothing pirates to deem this line worthy of a rip-off indicates an infestation worse than anyone suspected. 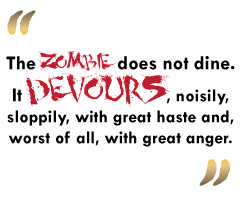 Just as vampires dominated the last decade of the 20th century, so zombies reign over the first decade of the new millennium. You can tell a lot about people by the way they have their monsters eat them, and the zombie does not dine. It devours, noisily, sloppily, with great haste and, worst of all, with great anger.

With the revival of the zombie genre, the undead have invaded far more than movies, comics and videogames. The resurrection of the zombie genre has occurred in both the mass media and the cultural underground. Zombie folk art is the best evidence that this creature represents something important for us. It all starts with the handcrafting of the zombie.

Zombies Are We
"I try to keep them in line as much as possible," Thea Faulds says of her zombies, "but I've had groups attack cars or restaurants."

A zombie walk is a moaning, groaning parade of the undead. Hundreds of people have taken to the streets in zombie walks in San Francisco, Vancouver, São Paolo, Montreal, Baton Rouge and Philadelphia. Faulds started the zombie walk phenomenon with just five friends in the town Canadians refer to as the "Good City." For the past six years, on the Sunday before Halloween, Toronto has enjoyed a shuffling invasion of its well-groomed streets. Because the horde now numbers upward of 500 undead, the annual walk takes months of preparation. Toronto police accommodate the zombies, despite the fact that Faulds has never acquired a permit. She sees the event as somewhat "punk rock" and has turned down offers of corporate sponsorship.