Will was eager to play a massively multiplayer online game ever since he could grasp the concept, so when he finally got the opportunity, he wanted to do it right. He meticulously tweaked the features of his avatar to his exacting specifications before journeying into the game world for the first time. He flew through the starting zone and led his fledgling fighter out into the next area - a zone where player versus player combat was permitted - confident the real fun was just beginning.

He enjoyed himself ... for about three minutes, until a fireball from a much higher-level character struck him. Naturally, he was dead before he even knew what was happening. What's more, the aggressor wasn't alone. He and his four coconspirators "ganked" Will's helpless character five times - once each - for no obvious reason other than that they could. 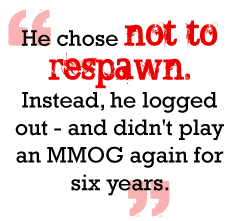 Some of us might react to this obstacle with gritty determination, vowing to build up enough strength to exact vengeance. Not Will, who was 9 years old at the time. He chose not to respawn. Instead, he logged out - and didn't play an MMOG again for six years.

Many kids Will's age play MMOGs, but these worlds aren't always hospitable to children. Fortunately, more enlightened attitudes now prevail, both across the industry and especially among companies seeking to attract precisely this younger audience. They comprise a growing list that includes a number of very prominent names, including Disney, the creators of Toontown Online and Pirates of the Caribbean Online, aimed at children and teens respectively.(Disney also purchased Club Penguin in August 2007) Likewise, Mattel's Barbie Girls and Nickelodeon's Nicktropolis each attempt to provide a safe online environment for kids to interact - both with each other and each company's respective brands.

Currently in development at NetDevil, LEGO Universe will bring another major global toy brand into the MMOG space. Producer Ryan Seabury is cognizant that that for any title aimed at non-adult users to succeed, experiences like Will's can't be allowed to happen. "When talking about kids and online experiences, of course safety is paramount," he states. He points out the U.S. Federal Trade Commission's Children's Online Privacy Protection Act (COPPA), which applies to websites that collect information from children under the age of 13. However, he readily acknowledges that mere compliance falls short of an acceptable safety strategy, and that the gaming industry has to set a higher standard. "Many modern kids will get their first multi-user online experience through MMOGs," he says. "It's our responsibility as developers not only to provide safe harbors for them to set sail from in their modern connected lives, but also to foster the fundamentals of being good online citizens."

All Work and No Play? Richard Aihoshi 0 Comments