Ken Locker is Senior Vice President of Digital Media at Cookie Jar Entertainment. Working with developers Tribal Nova and Frima Studio, his company has just released Magi-Nation: Battle for the Moonlands. Based on a property that includes a collectible card game and an animated TV series, it primarily targets "tweens" age 8 to 12. He places "the safety of our fans at the top of our priority list," noting that Cookie Jar voluntarily complies with the Better Business Bureau's Children's Advertising Review Unit (CARU), which reviews advertising and promotional material directed at children across all media, including the internet.

Cartoon Network Universe: FusionFall's Executive Producer Chris Waldron agrees. "It's essential to provide a safe online environment for children." he says. "When designing an MMOG for children, it is crucial to protect them from any form of harassment and potential online predators."

"Ganking" is one obvious form of online predation that has to be prevented. "It's no different for kids or adults," says Seabury. "It's just not a fun experience for those who end up on the losing side." He does, however, support consensual PvP as a form of good-spirited competitive play that participants who opt in will enjoy. To encourage it, he believes in rewarding both the winners and the losers, although the latter to a far lesser extent.

Magi-Nation goes a step further. It has consensual PvP, but according to Locker, the avatars don't engage each other directly. Instead, their Dream Creatures do battle. Success depends on how effectively the players imbue these summoned proxies with the strategic use of inventory items. "Battles are more like competitions. Dream Creatures don't die when defeated; they may lie dormant for a while, but they always return. Since the game is fantasy-based, we're able to accomplish competitive battles by incorporating elements like spells, curses and magic objects without outright representations of graphic violence."

Waldron and his team have also designed their combat system differently to fit younger users and to reflect the underlying franchise. "Like the cartoons that have inspired us, we expect FusionFall to be fun for kids of all ages. There's no death, blood or gore. Combat is lighthearted, rather than violent. We also believe this will make the game more enjoyable and accessible to a wider, casual audience." 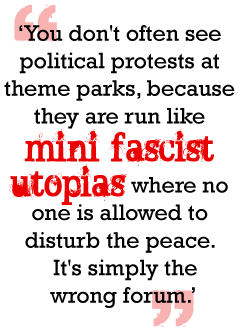 Inappropriate language is another major concern. "Some of the chat features would be very different if we were targeting FusionFall toward adults," he states. "Because we're dealing with a younger audience, we provide more restricted chat mechanisms and put the control in parents' hands as to what level of chat access they want their children to have."

LEGO Universe's Seabury adds that "if people are in your house saying things you'd rather your kids didn't hear, you have every right to kick them out; fundamentally, it's no different in an MMOG. You don't often see political protests at theme parks, because they - the good ones at least - are run like mini-fascist utopias where no one is allowed to disturb the peace. It's simply the wrong forum."

All Work and No Play? Richard Aihoshi 0 Comments
Comments on