Cookie Jar restricts open chat and monitors Magi-Nation for inappropriate behavior in order to provide an environment that's compelling, fun and rewarding for players. Ken Locker is unequivocal that "in order to make the game fun and safe for anyone who wants to play, regardless of age, those who don't want to be part of this type of environment will be prohibited from playing."

All three companies agree that providing a safe environment for kids and teens involves protecting them from a range of other undesirable behaviors, from following, stalking and harassment to scams intended to obtain items, in-game currency, account passwords or personal information. "Anything that creates a negative experience for a visitor to our world would be something we'd consider protecting against in our safety strategies," says Seabury.

These strategies encompass both design and enforcement elements. For example, Waldron says FusionFall will have both trained support staff and built-in algorithms that set off alarms when they detect potentially unsafe circumstances such as possible harassment situations. "At that point, someone from Cartoon Network will get involved and either ban the harasser or take another appropriate course of action. Our online support staff is already well-versed in online child safety." 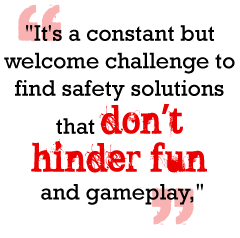 Coming from a background of creating and operating online games for adults, Ryan Seabury may consider his team's situation to be slightly lower on the learning curve. "It's a constant but welcome challenge to find safety solutions that don't hinder fun and gameplay," he declares. "Every game will have its own unique conditions and threat landscape to deal with, and of course, specific mechanics and features that may be hazardous in different ways. If you're making a title for kids, it's a safe assumption that customer service will be more significant than if you had targeted a more mature audience."

When Will had his disagreeable experience that put him off MMOGs for six years, it occurred in a game that wasn't designed for his age group. The reason was simple: such games didn't exist. But that's no longer the case. Children, tweens, and teens now have multiple choices geared specifically to their demographic, with more on the way. In addition, developers and publishers have had several years to learn about the core problems that can hurt a player's experience, how to help prevent them from coming up and how to deal with them more rapidly and effectively when they do. As a result, we can now safely say that MMOGs - at least, some MMOGs - are for kids.

Richard Aihoshi has been writing about games for over a decade, particularly the massively multiplayer and RPG categories. He has been known to play MMOGs and other games that are ostensibly for kids.

All Work and No Play? Richard Aihoshi 0 Comments