"My son just shot an innocent old lady in the head!" the blond woman shrieked as she flung the store's only door wide open. It was her second visit to the store that day, although in her previous visit she bore no resemblance to the beast that stood before me now. Where once there was a friendly smile, a well-groomed haircut and a pleasant inflection, there was now a snarling grimace, a tangled mane and a shrill, contemptuous tone. Then came the accusations: I had forced an awful, violent product on her innocent little boy. I was a corruptor of youth. Maybe even a criminal. 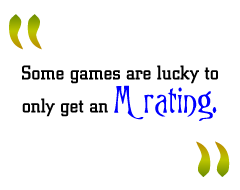 I can't begin to tell you how often parents storm back into my store to give my coworkers and me all manner of hell for selling them a violent videogame like Grand Theft Auto. We try our best to impress upon them that some games are lucky to only get an M rating. Blasting helpless elderly folks into oblivion? Stealing police cars? We should be ashamed, we're told, for not warning them about this horrible violence! But more often than not, parents complain about precisely the aspects we caution them most about.

Earlier that hot afternoon back in July 2005, a respectable-looking woman and her young son came into my store looking for Grand Theft Auto: San Andreas. I asked if she had an older child; surely she wouldn't buy San Andreas for the kid she had with her, who couldn't have been older than 10.

"Nope. It's for him," she said, smiling at her young son who boiled over with excitement at the thought of cutting his teeth on the newest murder simulator.

Company policy mandated that I had to tell a customer about anything in a game that would net it an M rating. A few weeks earlier, San Andreas fell under that category, until modders developed ways to access the infamous "Hot Coffee" sex minigame. Rockstar North put Hot Coffee on the San Andreas disc, but removed a way for players to access it through regular gameplay, effectively (or so they thought) locking it out of the game without actually removing it.

San Andreas, like so many of its predecessors in the Grand Theft Auto series, faced intense criticism for its overwhelming emphasis on violence, but the Hot Coffee minigame whipped the media into a frenzy. The ESRB was forced to re-evaluate San Andreas and give it a new rating: AO ("adults only").