Some of my most exciting moments in college happened across a pane of Plexiglas from a small monkey. As a researcher in a primate lab, I spent a semester helping to run "games" that measured the behavior of squirrel-sized tamarins and marmosets. 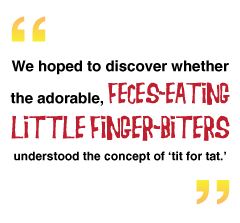 In one experiment, we tried to measure the animals' level of altruism in food sharing. A trained "stooge" on one side of the plastic box would give food pellets to a monkey on the other side, and I would watch anxiously to see whether the other monkey would reciprocate with generosity of its own. We hoped to discover whether the adorable, feces-eating little finger-biters understood the concept of "tit for tat."

Sometimes we had trouble separating the monkeys' quirks from the effects of the experiment. Some pairs of monkeys - especially males - simply hated each other. Sometimes certain monkeys would spend most of their time trying break out of the experiment cage, a feat that a devious little bastard named Othello achieved on a regular basis.

Now imagine conducting a behavioral experiment on children, whom researchers cannot cage and whose feeding and home life they cannot control. Psychology research offers important insight into the way people think and react, but it is very easily misinterpreted. Is it any wonder that we still disagree about whether videogames cause violence?

Unfortunately, if certain psychologists are to be believed, the matter is as settled as the theory of evolution. Craig A. Anderson, an Iowa State University professor and widely-quoted researcher of media violence, wrote in an article on the American Psychological Association website that the debate about videogame violence as a "significant risk factor for aggressive and violent behavior should have been over years ago," and that videogame violence studies consistently show effects such as "increased aggressive behavior," "increased physiological arousal," and "decreased prosocial (helping) behavior."

Though Anderson is one of the most widely-quoted media violence researchers, not all experts feel this way. On April 5, the editors of the U.K.-based Lancet - one of the most respected and influential medical journals in the world - contradicted Anderson's conclusion: "Some studies show that violent imagery increases the likelihood of short-term aggressive or fearful behaviour, especially in boys. The effects in older children are less clear and no long-term increase in aggressiveness or violence has been shown."

Compared to factors like poverty, abuse or mental illness, "exposure to media violence comes pretty low down on the list as a risk factor," the editors wrote. But, they continued, governments can do little about such deep-rooted problems, and when something like the Columbine shooting happens, "there is pressure to be seen to be doing something; it is much easier to talk tough on media violence than it is to regulate guns."

The rift between these viewpoints comes from scientists' interpretation of one of the most basic rules of experimental science: the relationship between correlation and causation. Correlation, the observation that two factors tend to occur together, is generally easy to prove. For example, consider the hypothesis that having a criminal record causes a person to wear orange every day. If you sampled prison inmates, you would find these two factors to be strongly linked - or correlated - but only an idiot would suggest that wearing orange clothes turns people into criminals. The correlation here comes from an outside factor - being convicted of a crime leads to getting sent to prison, and being in prison leads to wearing an orange jumpsuit every day.

Escapist Podcast - Science and Tech: 027: Is Space Exploration Worth the Risk? Is Your Mind F***ing with You? The Escapist Staff 4 Comments