It's deadly and alluring,
the sound of pounding heat,
enslaving all
who dare succumb
to the temptations of
the forbidden beat...

It is the solemn duty of the young to obliterate the expectations of the old. Each new generation of adolescents chisel their identity from their parents' ideals, terrifying their elders and seizing them with a deep ontological fear of the future. With a certain punk attitude, I held it as a certainty that I would never experience this fear from a videogame.

Please Insert Soul
Take Dance Dance Revolution and remove the social catastrophe of being seen dancing in a mall, and you have the basic concept behind Audition, created by T3 Entertainment and originally published by Yedang Online in Korea, now distributed in North America by Nexon. Add a dash of Rez-like trance, a competitive but affectionate social community and a healthy dose of licensed pop songs, and you have a game that is fast-paced, hypnotic and utterly terrifying.

I stumbled into Audition's Matrix-like world more or less by accident while researching rhythm games; it was a quick download, and free, to boot. In short order, I found myself piloting a generic, uber-cute avatar and surfing channel-style for "beginner" game lobbies, looking for action. Most of the available games were "normal," with various street names associated with their specific styles: "CC4/CC8," "b-boy," etc. "Normal" mode consists of a matching mechanic whereby players replicate sequences of arrow-key and spacebar presses to make their avatars dance. Eventually I settled on "Beat Up" mode. Beat Up more closely replicates Dance Dance Revolution than any other Audition game mode: Arrows scroll toward the center of the screen where players must match their keystrokes to the beat of the music. Keep up, and your avatar unleashes a flurry of slick dance moves; lose the beat and your avatar shakes its head in full-fledged teenage disdain.

I've played hard games, but even a game like Mega Man feels beatable. It might be wickedly difficult, but you still get the sense that if you played it long enough and worked hard enough, you'd eventually finish it. It's just a matter of time investment and sheer force of will. 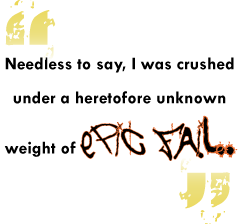 Not so with Audition. Halfway through my first Beat Up game, I had to push myself away from the keyboard to collect myself. I felt physical pain from trying to keep up with the flying arrows. Needless to say, I was crushed under a heretofore unknown weight of epic fail. My three glib opponents completely and totally annihilated me. What they were achieving in speed and coordination simply wasn't possible.

Several explanations crossed my mind. First, it was all a cruel joke - these were Japanese AIs seeded into the community as part of some nefarious psychological attack on the West. Second, something on my computer was broken. Third, simultaneously most frightening and plausible, was that these people, these children, weaned in an age of instant messaging and ubiquitous cell phone texting, had somehow surpassed the capabilities of my primitive 8-bit brain. Blessed, fickle Youth had abandoned me. I was old. I recalled my stepmother's nauseated intolerance for the high-speed loops of Sonic the Hedgehog 3, and despaired.