While looking for literature on how human beings react under stress in deadly situations, I found a fascinating book, titled On Combat, by Lt. Col. Dave Grossman and Loren W. Christensen. On Combat makes a seemingly reactionary claim, made many times before; namely, that violent videogames are creating a generation of killers. What's startling, however, is that this time, it's true.

Despite the heated rhetoric from both sides of the debate about violent games, it's a truth not generally recognized or discussed. To some degree, we can blame Jack Thompson and his ilk - the moment he starts talking about games as "murder simulators," the field polarizes, and any useful discussion is lost. Indeed, the mere suggestion itself is unbelievable, and who can blame the public or the average gamer for being suspicious when so much of the debate has been fear mongering?

But it's a well-documented fact; and to know why, you have to understand a discovery that was made more than half a century ago.

It was thought up until the end of World War II that if you fielded an army of 100,000 riflemen, you would have 100,000 combatants. In practice, however, there were some discrepancies suggesting this wasn't quite the case. This led General S.L.A. Marshall to publish a book in 1947 titled Men Against Fire: The Problem of Battle Command, where he revealed that in combat only 15 percent of soldiers unsupervised by an officer had fired their weapons. 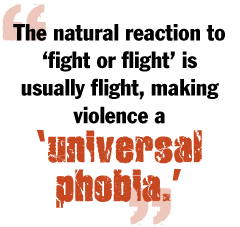 The theory goes: In extreme stress, the logical part of your brain shuts down, relinquishing control to your middle brain, or what Grossman wryly calls the "puppy brain." The middle brain is not at all logical - it relies on instinct - and by forgoing the process of rational thought, it can react faster to situations in which a moment of hesitation could be deadly. In around 85 percent of trained soldiers up to the end of the World War II, there was a part of their middle brain that recognized that the enemy was another human being, and refused to kill him. This social consciousness even under extreme duress is normal - we are born this way. The natural reaction to "fight or flight" is usually flight, making violence a "universal phobia," as Grossman states.

This new understanding led to the realization that if you could train soldiers to override the part of their brain that wouldn't allow them to kill, you would have more effective combatants and, therefore, a more deadly and efficient army. Training for the armed forces slowly began to incorporate measures to "dehumanize" enemy combatants. First, they replaced the circular targets at firing ranges with human-shaped silhouettes. The result was dramatic - in the Korean War, around 50 to 55 percent of soldiers would fire their weapons at the enemy. The army then changed the targets again. Instead of silhouettes, they now looked like human beings, had faces, and were rigged to fall down once they had been shot. During the Vietnam War, the percentage of soldiers who would fire their weapons at the enemy rose to more than 90 percent.