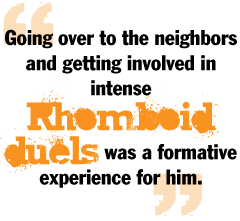 The idea of gameplay as a social environment is perfectly natural for writers - in fact, for most people - of Fraction's generation. The first game he played was the Atari 2600's Combat, which the family across the road owned. Going over to the neighbors and getting involved in intense Rhomboid duels was a formative experience for him. "I've always been a fairly casual gamer," says Fraction. "I've never been ultra-dedicated. I'm terrible at it, ultimately, is what it comes down to. Rather than practice and become better, I hit an obstacle, become bored and get distracted by something." The point of gaming for Fraction was an excuse to socialize. "Even back in school, someone would have a Super Nintendo," says Fraction. "You'd be waiting your go for SF2 or whatever, but ... I'm such a terrible gamer. It's always been about the opportunity to get together and talk shit. My favorite times with games on Xbox is the beautiful first week when a game's just come out, everyone's still on the same skill level and I'm about as good as I ever get. If I'm ever going to back up my shit talk, it's going to be in that first week."

For most people, games are an excuse to socialize, whether it's in an MMOG or over a round of golf. With voice chat over internet play, however, play has gone global. "It's such a solitary job, you sit alone all day in a dark room all day long," says Fraction. "It's so crazy. To be able to talk with people, just for a little bit."

Pondering the idea of a group of Marvel creators facing off, a gamer and comic fan has to wonder: How best to deal with them? How do you take down Ed Brubaker if you found yourself in a horrific online conflict? "Ed is really disorientated spatially," says Fraction. "He has a degree of motion sensitivity. Before my time, he was driven to vomit by a particularly brutal game of Call of Duty 2. If you're looking for an advantage on Ed, turn around a lot, make him constantly re-orientate to find you. That's the way to do it."

One down. How about the others he plays with? Ms. Marvel writer Brian Reed? "Reed is a videogame writer who got into comics through videogames, and he's fucking brutal," says Fraction, noting his previous work with Pandemic. "Bendis jokes he's like Neo in The Matrix. He really is. It takes Reed four or five days to get good." In short: Don't play with Brian Reed. What about Brian Michael Bendis, one of the main writers who's defined the last 10 years of Marvel comics? "Bendis has the same kind of savant-like dedication to work which he does to games," says Fraction. "We played Call of Duty 4, and wanted to keep it private matches ... but he always wanted us to go public: 'I need to level up.' He was obsessed with leveling up. Much like his work, he's dedicated to working harder than anyone else in the world." Also in the group is Gerry Duggan, a G4 employee who Fraction describes as "preternaturally gifted. It's through guys like Gerry that we got to play Gears [of War] one night with the developers, which was excruciatingly humble," says Fraction. "Completely unfair to people like me. It has to be like a professional football player facing off against a 9-year-old."