Two Soldiers, Two Wars
In the 1990s, several authors compared the Punisher and Captain America as two old soldiers; one from World War II, the other from Vietnam. Chichester and Clark's Punisher and Captain America: Blood & Glory showed each soldier regretting his war - Cap for the bombs that won World War II; Castle for the politics that lost 'Nam. Naturally, the Punisher tries to assassinate Cap. Then they team up, ride motorcycles together and argue about war. It's a reconciliation story.

Garth Ennis had Castle finish the job on Captain America in The Punisher Kills the Marvel Universe, an out-of-canon story in which Castle kills everyone with superpowers, criminal or not. He gets the drop on Cap by fighting dirty. Castle chides Cap for his ignorance of the My Lai Massacre just before he shoots him in the head.

Fraction's War Journal complicates this relationship further by taking the opposite tack. His Punisher worships Captain America. They end up on the same side during Marvel's Civil War event. When the Punisher kills a couple of villains and Cap beats the crap out of him for it, Castle refuses to fight back.

War Journal shows us that before his first tour in Vietnam, Castle had done the same thing while being trained by Captain America in boot camp. No matter how much Cap battered and berated him, the Marine who would become the Punisher would not raise a hand against the living embodiment of everything right and good about the United States. 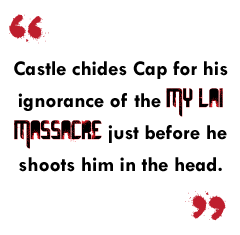 The Punisher's deference to Captain America tells us something vital about Castle's psyche. Spider-Man and Iron Man both attacked Captain America during the Civil War, but the Punisher never did. The idea is that it's impossible for anyone else to maintain such integrity these days, to have such absolute conviction. Castle is old-fashioned that way.

In Fraction's account, the Punisher - far from assassinating Captain America - takes Cap's death last year so hard that he actually dons a costume reminiscent of Cap's and fights the Hate-Monger, a re-imagined Cap villain. Perhaps nothing in comics in recent memory has been as weird as seeing a star-spangled Frank Castle announce "I'm Captain $%^&^% America."

Captain America is the moral core of Castle, but the Punisher still ends up shooting the Hate-Monger in the face. What happens, then, if we approach Frank Castle from the side of violence?

One War, Two Soldiers
Barracuda had the Punisher on the ropes. A giant black man, a mercenary, a convict, ex-Special Forces, a Vietnam vet, Barracuda was beating the Punisher into the ground. Castle had recently blown up a car in Barracuda's face, electrocuted him, stomped on his head and shot him. Prior to all that, Castle had stabbed out his eye, cut off four of his fingers, and bitten through his cheek; later, he would chop off 'Cuda's right arm and his left hand, then blow his brains out with an AK-47. But, for the moment, Castle was swallowing his own teeth as fast as Barracuda was punching them out.

The Punisher got his hand on a pair of folding pliers, which he'd been using to defuse a Claymore mine attached to the car seat that held his infant daughter, Sarah. Barracuda had kidnapped Sarah and placed the mine there. Castle jammed the pliers into Barracuda's face, squeezed with both hands, twisted and slowly tore off Barracuda's nose.

This scene is the climax of "Long Cold Dark," a five-issue MAX story by Ennis and Goran Pavlov. It is the best half-year comic book arc of the last two decades. Ennis does two great things in these five issues: He gives us Barracuda, the character who better than any other mirrors the psychology of Frank Castle, and he shows what family really means to the Punisher.