The Realest Man in Comics
The strangest thing about the Punisher is that he doesn't exist.

Frank Castle, Marvel Comics' vigilante anti-hero, first appeared as a Spider-Man villain in 1974. A Vietnam vet whose family had been murdered by the mafia, Castle became the Punisher to use the methods of war on the problem of crime. For the first two decades of his career, the Punisher represented American paranoia about crime and discord over the Vietnam War. These days, Castle embodies a different conundrum. 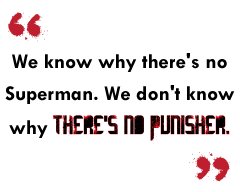 Castle has no superpowers. The Punisher wears no mask. Men with his skills and physique walk the earth today. His costume consists of a T-shirt. The weapons he uses are real and readily available. Two generations have grown up with his stories, but no one has ever taken up his mantle. Castle's plausibility is unique among comic book heroes. We know why there's no Superman. We don't know why there's no Punisher.

The best Punisher stories - in any medium - explore this mystery. They illuminate the one element that separates the Punisher from the real world: the peculiar psychology of Frank Castle. Traditionally, this task involves exploring Vietnam and the death of Castle's family - that is, unless we're talking about the movies.

Hollywood Can't Crack the Punisher
The Punisher appeared on film in 1989 and 2004; a third movie will appear later this year. Each movie re-launches the character; no one's been able to establish a franchise.

1989's Punisher is a hoard of B-movie gems. Dolph Lundgren, as Castle, shows his bare ass three times, Louis Gossett Jr. plays a detective named Jake Berkowitz and a blonde Czech girl portrays a Yakuza ninja. Though the film mitigates the Punisher's craziness by having him rescue a bunch of mobsters' children from the Yakuza, Castle does teach one of the boys an important lesson by killing the kid's father in front of him. This is as close as Punisher cinema comes to a moral quandary.

Ennis's Knights is nearly a Mad Magazine-style superhero parody. In its climax, Castle kicks an old woman who is also a quadruple amputee into a house fire. The scene's both horrifying and hilarious. But when the movie folds Ennis's black humor into its kick-ass formula, it makes for a nauseating ragout. The film ends with John Travolta, the main villain, chained to the bumper of a rolling car in a parking lot, which explodes in the shape of the Punisher's skull logo. There's no allusion to the Bat Signal here; no critique of vigilantism. It's just braggadocio.

This year's Punisher film adapts Ennis's work on the Punisher under Marvel's MAX imprint, which permits adult language and situations. The movie will be terrible, but it will draw attention to some excellent source material. Along with the new (since 2007) Punisher: War Journal by Matt Fraction, the MAX Punisher constitutes some of the best contemporary work in comics. Ennis' run, in particular, which began in 2004 and will end this August, stands out as one of the great achievements of the medium. These two series show where the movies went wrong. Both comics demonstrate the uniqueness of Frank Castle's tortured mind by having him interact with characters almost - but not quite - like him.