The greatest games did not spring from nothing, but were inspired and influenced by their predecessors. Wolfenstein 3D led to Doom, which cast a long shadow across games like Duke Nukem 3D, Quake, Jedi Knight, Unreal, Half-Life and Halo. These games also influenced or responded to one another, and current-generation games are still reacting to them. All creators and audiences are influenced by their prior experiences, and the greater exposure we have to these influences, the more we can bring to each new work. Conversely, an audience that can't make informed comparisons and judgments is liable to believe that what is clichéd is original, and what is derivative, revolutionary.

The danger is that catering to an uninformed audience will encourage publishers and developers to fall back on "safe" decisions, embracing repetition and repackaging only what is popular. That can push the entire medium toward homogenization, a trend that we're arguably already seeing. This is not to say that great games aren't being made, or that originality is dead, but to point out that several genres have mostly fallen by the wayside. When I got into gaming, there were plenty of flight sims, wargames, racing sims, adventure games, strategy games and space sims. Those genres produced a lot of great games, and they made being a gamer more interesting because of the variety of experiences they offered. 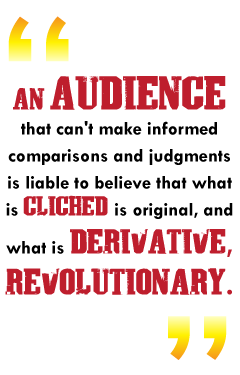 Nowadays, most AAA productions are focused on a handful of genres that have proved they can produce blockbuster titles: genres like shooters, RPGs and platformers. In comments to Gamasutra regarding the Activision/Blizzard merger, Wedbush Morgan analyst Michael Pachter predicted that, "Activision and EA will only make games they expect to sell over 2 million units every year, while the others will still try clever Wii and DS games that make plenty of money at 500,000 units." These are fairly high thresholds for success, and they will drive the major publishers away from games that seem risky or difficult to market.

That might be a responsible business decision, but it sells gamers short. When the games industry was smaller and there was less pressure on publishers and developers to create blockbuster franchises, mainstream appeal was not always an overriding concern. In his review of S.T.A.L.K.E.R., 1UP.com Editor Shawn Elliott wondered if this wasn't the kind of game "made before 'everyone' became a target audience." That observation neatly identifies the trap into which much of the industry has fallen. Since the "mainstream" has been defined as everyone with a gamepad and a pulse, "mainstream tastes" are impossibly confining: Almost no game can be all things to all people.

However, classics from earlier eras demonstrate that the best "niche" games can transcend genre barriers. Games like Red Baron and Secret Weapons of the Luftwaffe may have been flight sims, but they were so polished and welcoming to less-experienced gamers that even someone like myself - who would rather die in a plane crash than learn how to pilot in Flight Simulator - fell in love with them. Likewise, you don't have to be a hardcore wargamer to get caught up in the intensity and drama of Close Combat or X-COM.