Despite larger development teams, bigger budgets and vastly superior hardware, gamers seem to be getting less variety and fewer new experiences out of their games. Developers often opt to make small refinements at the periphery of a genre rather than deviate from its major conventions. Consider the glut of games using the "cover" dynamic that was popularized in Gears of War: What was a novel and original twist on the conventional shooter is now a core gameplay element in a slew of titles. 2K Marin's Steve Gaynor explained the problem with such copycatting in an interview with Michael Abbot of The Brainy Gamer:

"Games that follow that sort of commercial release, instead of expressing a personal experience that one of the designers had, they're expressing the experience of playing Gears of War. ... It does the medium injustice if you put all this work and time, instead of attempting to express something unique and personal to yourself through interactivity, you're expressing the experience of playing another video game that you like, or was profitable." 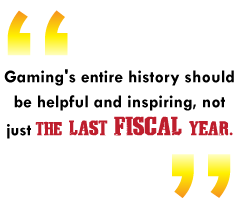 Such derivation reflects a frustrating tendency among publishers and developers to treat a game's constituent parts as if they were upgrade options for a minivan. If one game has cover and another has downloadable content, the reasoning goes, a game with both should be superior. It's fallacious logic, since great games are more than the sum of their parts; but it's the kind of reasoning that can take hold of an industry that spends too much time and energy trying to recreate its most recent successes. Gaming's entire history should be helpful and inspiring, not just the last fiscal year.

Unfortunately, it's not at all clear how a "classics revival" movement would best be accomplished. As much as I love some of those brilliant 320x200 pixel masterpieces, they're a bit rough around the edges by today's standards. On a lot of fixed-resolution LCD monitors, they look like a Rothko washed in concrete. There are many reasons to doubt that more than a handful of diehard fans would pay to play a 13-year-old game in its original state. To share classic games with people who have never seen or played them before, the games would benefit from a little more graphical polish and, more importantly, supplementary content aimed at the passionate gamer.

Most serious gamers would probably appreciate a "collector's edition" approaches to re-releases and remakes. Limited edition releases of Blizzard titles include books of design notes and concept art. And with The Orange Box Valve has proved that in-game commentary tracks are not only possible, but also enjoyable and informative. The importance of these extras is not that most people use them, but that they give the few who become creators, critics and enthusiasts the opportunity to explore the medium on a deeper level. We're the ones who will shape gaming's future - it's only fair that we're granted access to the lessons and achievements of its past.