After more than nine months, those Mickey Mouse ears are starting to look damn good right about now.

The Wedding Planning Game, he said, is a never-ending fetch quest; a months-long hunt for vendors, reservations, orders and contracts, culminating either in a successful ceremony or your premature death. It's like Pokémon: the perfect photographer, florist, caterer, DJ, officiant, jeweler and bridesmaids - gotta catch 'em all.

But what he failed to mention was how carnivorous the wedding industry can be - how hunted you'll feel, how small and commodified, so much a pathetic creature of meat and bone. How bridal consultants will not smile so much as bare their teeth, salivating as you swim through rows of satin and crinoline. How caterers will stealthily fatten your bill, sneaking in uncorking fees and linen rentals. How the saleswoman at the stationery store will sound exactly like GLaDOS as she discusses engraving and cotton paper, and will not be able to stop licking her lips. 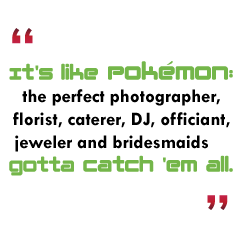 It's like the Money Making Game, alright. Or even worse. The wedding industry is a $70 billion behemoth, predicated on superstition, ignorance and blatant emotional manipulation. The Old Man of the Cave only wished he'd thought of a scam this good.

Yet I've stuck to my guns, managing the demands and the constant swirl of activity as best I can. Because even though my friend's modest proposal sounds good on paper, I know I could never pull it off.

For starters, I'm Jewish. And Southern. And the youngest child. And the only daughter. If I were to elope, it wouldn't just kill my parents. They would explode in a hypernova, destroying all life on Earth before sucking the planet into a mini-black hole.

But guilt isn't my only motivation. Part of me really does believe in the ceremony of weddings. I don't mean the altar flowers or the cathedral trains or the stupid little jellybean favors. The actual ceremony itself.

Anyone can get married. But a wedding is an event - a common celebration to be shared and discussed and laughed about. It's part of your collaborative identity, both to your family and your community. And to shape that, I'm willing to play the Wedding Planning Game for as long as it takes.

Still, I have to admit: When faced with the choice between thermography and engraving, the temptation to ride into the sunset on Mr. Toad's teacup gets stronger by the day.

Dream Day Chainsaw
The most telling sign: I haven't played a game in months. I've been too busy with house-hunting, building a new business and, of course, dealing with impossible choices like "chicken or fish?" to fire up the Xbox. My poor DS, once the mainstay of my evening entertainment, is coated in thick, gauzy dust, and I can't remember the last time I touched Guitar Hero. My living room is a graveyard of PS2 games and abandoned Wiimotes. It's depressing.

This Is Your Brain on Smart Drugs Lara Crigger 37 Comments