When is a game "just a game," and when does it become something more? We all come up against this question sooner or later - but no player quite experiences this question like the MMO gamer. And now there's a new question, sharper than the last: When you invest weeks, months, even years into a single game, what happens when someone robs you of your efforts?

Account theft is not a new phenomenon, but because of the increased monetary value of these accounts - accrued from the labor of honest players - hacking has reached monumental heights.

Dave Weinstein, formerly of Red Storm fame, now speaks on the huge prevalence of unregulated character theft and the black market sale of virtual goods. Weinstein addressed game developers at Gamefest 2006, warning that organized crime had targeted MMOGs as an easy method of generating cash in a largely unregulated market. Part of the problem is a lack of law enforcement infrastructure in dealing with the value - and following the theft - of virtual property. "The police are really good at understanding 'someone stole my credit card and ran up a lot of money,'" Weinstein said. "It's a lot harder to get them to buy into 'someone stole my magic sword.'" 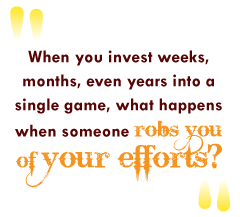 Square Enix, at least, hasn't gained much traction on this problem in the last two years. Earlier this year, the company came under heavy fire when thousands of Final Fantasy XI accounts were hacked - stolen from their owners with keyloggers, rapidly stripped of high value items (often totaling in the thousands of dollars for max-level characters) and returned, denuded and worthless, only months later.

Identity Theft
Michelle kept detailed notes. She even knows exactly when it all began - August 27, 2005, the day she signed up for Final Fantasy XI. "Like any first-time gamer, I began playing the game a couple hours here and there and maybe a few hours on the weekend," she said. She'd never played an MMOG before.

"Through time I began to develop friendships and a character that would become as much to me as 'real life' relationships are. The amount of time I devoted went from five or six hours a week to almost 60 to 80 hours a week. When I wasn't playing, I was working or sleeping." It's a familiar story to anyone who has gotten sucked into the world of an online game; a story that, these days, millions of people are experiencing.

The game became a part of her real-world social life."Often times while at my job on break, I would talk about what we had done the night before. A funny thing is my friends, family and co-workers came to enjoy the tales I would come in to tell," she said. Her character, a Paladin we'll call "Mali," had become as real to her as another side of herself. "Folks who don't play don't understand the amount of work players invest into their characters."

On December 14, 2007, a hacker broke into Michelle's account and changed all of her personal information: name, location, credit card account. Her virtual identity had been stolen and rewritten. At 9 P.M. when she attempted to log in for an evening's adventure, her username and password failed. "My heart sank a thousand feet," she said. She called up customer service - but it was a Friday night, and Account Services wasn't there.