There's Nothing We Can Do
She called again first thing on Monday morning. "They told me if I could not give them the 'current' information on the account, there was nothing they could do." When they asked her how they could be sure she wasn't in fact a hacker trying to break into someone else's account, she argued with passionate logic that if she was a hacker she wouldn't be able to provide her comprehensive account history, including payment records dating back two years. Sorry, Square Enix said - it's Just Against Our Policy.

Michelle was hardly alone. By the time her account was hacked, thousands of other players had suffered the same fate. Theft victims circulated an online petition to attract Square Enix's attention and recover what they had lost, while the community whispered urban legends of players whose characters were stolen and never returned, sold like abducted children on the black market for real-world cash. 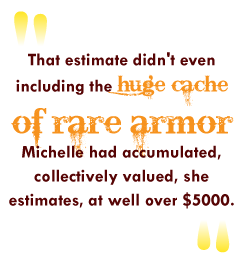 Michelle frantically scanned these unauthorized auction sites daily, looking for a character that matched Mali's description - a high level paladin worth, according to her research, between $1500 and $2000 in these markets. That estimate didn't even including the huge cache of rare armor Michelle had accumulated and stored in Mali's inventory, collectively valued, she estimates, at well over $5000.

She started on the white-hat side, looking up contact information for internet lawyers. When she found one, "I explained to [him], if someone stole Yahoo people would have the suits flying. Yahoo isn't a tangible item, and does have value. My character is basically the same thing." But he wasn't interested. "He ... explained there was no one he knew of that even attempted such litigation, and believed it would be fruitless. I was becoming more and more desperate to get help ... or to find someone that would listen and understand."

When the white hats failed, she turned to other options. "I [started] looking for a hacker to steal the account back," she said. If a hacker had broken into the account in the first place, she reasoned, another person with similar abilities should be able to get it back. And Square Enix clearly didn't have a problem with the hackers doing it. She didn't find one, but she did find Dave Weinstein and his security talks.

Weinstein counseled her against "stealing" the account back, for legal reasons, and advised her to keep trying with Square Enix - that if she was persistent, customer service would relent and give her account back. "I realized very quickly David did understand how I felt," Michelle said. "Finally, someone who at least cares!"

Weinstein turned out to be right. In February, nearly three months after Mali and all her holdings were stolen, Square Enix agreed to return Michelle's account. But her digital Odyssey wasn't even close to over.