No Legal Right
Even after Square Enix's customer service determined that Michelle was, in fact, the rightful owner of the account, getting Mali back was no simple enterprise. Square Enix's legal office sent her a "Final Fantasy XI Notarized Account Verification Declaration," which she would have to sign, notarize and send back - just to allow for the possibility of reclaiming her account.

The wording of the declaration, however, made Michelle hesitate, in spite of her desire to get her account back. Most of the language was standard - she was required to state that she was the original owner of the account, it had never been transferred and it had been compromised against her will. But item number seven was a doozy:

7. I understand that I have no legal right to the return of my compromised PlayOnline account, and that the submission of this signed and notarized form to Square Enix, Inc. is no guarantee that I will obtain a return of this account." 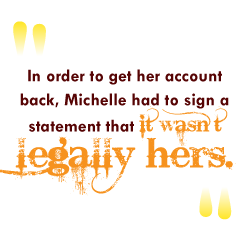 In order to get her account back, Michelle had to sign a statement that it wasn't legally hers.

She called another lawyer - this time a friend of the family. His response was sad, but pragmatic: "He said, 'What do you have to lose? You've already the lost the character ... just sign it and hope for the best.' "

Michelle agreed, signed the form, and shelled out for overnight shipping to El Segundo.

Victory?
On February 5, 2008, Michelle got her account back. Before she let herself log on, she took her computer to a repair shop to have it scanned for viruses. They found not one, but 22 unique keylogger viruses. They cleaned up her machine, installed a full battery of protective software and instructed her only to visit protected sites. She brought it home, fired it up, and started playing.

The damage was severe. "What little money I had was gone, my armor - treasured pieces of armor given to me over the years - gone. I had no shield to use as a paladin, nor money to get another. I was quickly realizing how difficult it would be for me to play with a character not suited to perform." But she had Mali back.

"I felt defeated, broken," she said. "How could I win, if they could just take it from me whenever they wanted? I'd done everything within my power to protect my account."

Back to the repair shop Michelle went. "They accused me of going to a page that had the keylogger program. To their surprise, I had not gone anywhere. I had only been on PlayOnline. The store's position was [the hackers] must have hidden it so well their systems didn't locate it [the first time]. They recommended I reformat the hard drive and reinstall everything."