After several more trips through the Customer Service gauntlet, she finally had Mali back again - but when it came time to log back in, she couldn't bring herself to use the account. "Don't get me wrong - there's a side of me that is itching to get back on to game and enjoy it as much as I did. But now there is another side that just can't see putting so much heart and love into something, just to have it ripped away."

The kicker: Once Michelle's account was restored and attached to her credit card, Square Enix hit her for fees associated with the hacker's invalid credit card number.

Lessons
Michelle wants to educate players on how to protect their accounts - and she wants MMOG developers to take responsibility for what they create. "Players need to change their passwords often. Too many times we get used to the 'ease' [with which] games allow us to log on. Companies with online games need to be active. I would think they would be one of the first to hear a rash of accounts are suddenly being taken. They could put up a warning to players to change passwords or at least be aware."

FFXI actually does this on occasion - but it isn't enough. "They need to have a way where accounts that have been hacked can be locked immediately, until the correct owner is determined. Companies need to use common sense. If they are looking at information changed on an account and it is obviously wrong, it should be addressed immediately." 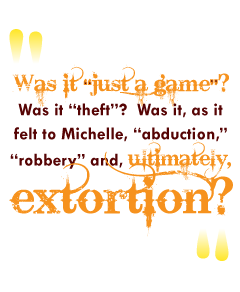 "MMO companies need to remember it is the players that makes them exist. I know many players who have told me if their account was stolen, they would quit and never return." And this is, indeed, what a lot of hacked players do - especially the ones who have experiences like Michelle's. Once she had her account back, she petitioned Square Enix to have her stolen items returned. Sorry, they said, it's been too long. Square Enix has a seven-day time limit on the return of stolen online goods.

Michelle's odyssey brings to mind Julian Dibbell's famous "A Rape in Cyberspace," often cited as a defining moment in the brave new world of online interaction - and as an early stimulus for cyberlaw itself. Dibbell attacked head on the ultimate question at issue here and in all online spaces: is it a crime if it's "just online"? How do we classify Michelle's experience? Was it "just a game"? Was it "theft"? Was it, as it felt to Michelle, "abduction," "robbery" and, ultimately, extortion?

While we attempt to answer these questions, stretching how far into the realm of the virtual we can extend our real-world ethics, the raw facts are that perceived injury is resulting from this online exploitation. Individuals and institutions in meatspace can, when pressed, parse her financial loss, but not her status as a victim of criminal activity. When the life of a mind takes shape in a society suspended in the ether, where is the ruler for Michelle's injury? Do we mechanically dissect her expansive virtual life experiences, compress them into our worldview and then stretch them against the cold table of our real-life objectivity?

If we do, is it justice?