"I expected to find six guys working in a basement somewhere," he laughs, "and all I was hoping for was a few weeks of contract work to earn some extra spending cash. Instead, I discovered a company of nearly 100 employees with the first Baldur's Gate game already under their belts. Naturally, when they offered me a full-time job I jumped at the paycheck, dropped out of school and here I am." 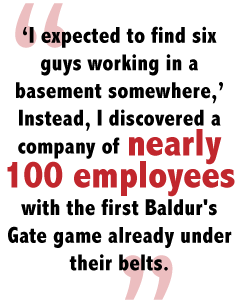 After working as a writer on Baldur's Gate 2: Shadow of Amn and its expansion pack, Throne of Bhaal, Karpyshyn became Lead Writer for Knights of the Old Republic, considered by many to be the definitive Star Wars gaming experience.

"We knew right away we wanted to explore something new in the Star Wars universe," Karpyshyn replies when asked about the unique setting of KOTOR. "We also knew that if we created a game set before the movies we'd have more creative freedom, so we began exploring existing Old Republic settings. We did a lot of research, and finally came up with a spot on the timeline that gave us the freedom we needed, but also fit into the existing Star Wars universe."

"Working with James Ohlen [Lead Designer] and Casey Hudson [Project Director/Producer] we developed the entire main storyline - as well as the main characters - for the game. I also wrote the critical path and several party members, and I worked with the other writers [David Gaider, Peter Thomas and Luke Kristjanson] to make sure we maintained a consistency of style throughout all the different worlds, areas and events of the game."

Many players (myself included) were blown away by the "big twist" in KOTOR - that the main character was also the villain of the story. I asked Karpyshyn how this concept came about. "The basic core - you as the player were actually the main villain - was there very early on. I'm not positive, but I believe it was James Ohlen who first came up with that idea. But the details evolved very slowly over time: We considered a Sith ritual gone wrong, a cloning experiment and finally settled on the Jedi 'reprogramming.' In the end we knew - as with most ideas - it was all about how it was set up and presented that would make it work."

Interestingly enough, the idea of a "cloning experiment" as the main storyline couldn't go ahead due to the fact that LucasArts felt the concept was too close to that of the as-yet unreleased Attack of the Clones. This highlights one of the key difficulties of working with someone else's intellectual property: playing by their rules.