The obvious question to ask someone who is both an accomplished game writer and novelist would be: How does writing for the two mediums compare to each other? It's a question close to Karpyshyn's heart, and he answered it in some depth. "I find there are a couple major differences between the two [media]. The first is in the final product: Games - at least, BioWare games - tend to have a much broader and far-reaching scope than any novel. Take KOTOR: we had nine major characters who could join the party, hundreds of people you could meet and roughly 500,000 words of dialogue - about the equivalent of five full novels. However, because the player is in control of major sections of the story, a game is forced to deal with things on a more superficial level." 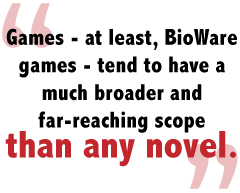 "We don't know what order players are going to visit our worlds," he continues, "or which choices they are going to make. Because of this, we sacrifice complexity to maintain control of the story. Conversely, in a novel the author has complete control. Every move by every character is known well in advance, allowing the author to spin a very complicated, intricate story that digs way, way down into the core of the major characters. In short, games are wide and far reaching but the story tends to stay more on the surface, while novels are much more limited in focus but incredibly deep."

The other major difference is in the creative process itself. "A novel is a very individual effort: the author sinks or swims on his or her own merits alone ... in the end the book is quite clearly a reflection of my own personal vision. A game involves creative input from hundreds of people [and] the end product is a reflection of a group vision, with every person contributing in their own way. In a game, you sacrifice some creative control for the sense of community that comes from sharing and building your ideas with other talented and creative people."

Whether talking about his award-winning work at BioWare, his best-selling efforts as an author or the indelible mark he has left upon the Star Wars Expanded Universe, it's impossible to deny that Drew Karpyshyn - former truck driver, loan officer, and almost-English professor - has become a Jedi Master of his craft.

Tim Sweeney is a burgeoning freelance journalist, author, and lover of everything "geek." His personal blog, "The Evil Wombat's Lair," can be found at http://evilwombat.wordpress.com