The Star Wars universe is friggin' huge. George Lucas' brilliant vision of a "galaxy far, far away" was imaginative and well crafted, and audiences immediately fell in love with the sci-fi epic. They craved more of it - lots more of it - and Lucas delivered in spades. Star Wars showcased him as a great storyteller, but he demonstrated his true genius in marketing. If there was a product to be sold, there was a Star Wars version. And we ate it up; every Han Solo action figure, every Darth Vader Halloween costume, every pair of Chewbacca underwear. The landscape of popular culture was altered forever. 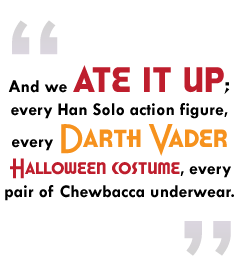 But the marketing genius didn't stop there. Multimedia was the next frontier, the next section of the Outer Rim to conquer in the name of the Empire. Writers created new adventures spanning books, comics and videogames. The media invasion gave other talented artists and storytellers a chance to inhabit the universe and create their own piece of Star Wars fiction. That Lucas allowed fans to create new stories and mythologies is both the greatest triumph of the Star Wars saga - and its undoing.

My journey into the Expanded Universe began when I was young, as it does with most fans not old enough to witness the movies' debut in the theaters. After a particularly nasty fight with the flu in middle school, my dad brought home a present to relieve the cabin fever: The Truce at Bakura, just released in paperback. As I sat in my room, coughing up lung juice and drinking flat 7UP, I read about the events immediately after Return of the Jedi, of Luke traveling to a mysterious planet and of Leia and Han as they dealt with the consequences of overthrowing the Empire. It was simply awesome to discover that the story didn't end with the fireworks on Endor. Cue the Aladdin soundtrack - I was in a whole new world of Star Wars.

From that first book onward, I sought out as much multimedia from the Expanded Universe as I could find. And thanks to the ceaseless productivity of the Star Wars industry, it was in an almost never-ending supply. I quickly discovered Timothy Zahn's Heir to the Empire trilogy, perhaps the best and most popular point of entry into the Expanded Universe. Taking place after Truce at Bakura, the story introduced the beloved characters of Mara Jade, Grand Admiral Thrawn and Talon Karrde. A small entry in The Essential Guide to Vehicles and Vessels led me to the Tales of the Jedi comics. With the announcement of Jedi Knight: Dark Forces II, I played the demo daily after school, savoring every moment of being a Jedi. At age 15 I was terrible at videogames, but that didn't stop me from trying to gun down stormtroopers and Bossk lookalikes after homework. When I finally bought the full game - I still sucked, even at the demo levels - it felt like being the main character of Return of the Jedi.

At that time, the expanded Star Wars universe's synergy had power over me. It mixed with the trilogy in a homogeneous way, never detracting from the magic of the movies. The Original Trilogy stood as the monolithic source for all extraneous Star Wars media, casting a giant, benevolent shadow over all onlookers. Out of love for the series, authors brought their creation under that shadow willingly. Sure, authors developed new characters, planets and alien races, but every story meshed into a persistent world with its own chronology. To do otherwise was tantamount to blasphemy.