Before long I had a burgeoning assortment of prized possessions. Yogurt cups with the foil painstakingly peeled back so as not to tear (but not so far that it detached from the rim); unforgivingly delicate cellophane from a packet of biscuits unglued and gently pressed flat for posterity; bubble bath callously poured down the sink so the bottle could take its place in my trophy cabinet; piles of unworn clothes carefully folded and tucked away so as not to crease the Jedi-based screen printing.

Leaving the house on any kind of errand became an exhausting and disheartening task for my parents. Star Wars was completely unavoidable, so no matter where their family duties took them, there'd be some kind of vital addition to my collection that had to be procured. If only the collection consisted solely of toys, it wouldn't have been so bad; we were broke, and the toys weren't cheap, so it would have been a simple matter to deny their purchase. But when your kid stops asking for expensive Dagobah playsets and starts looking pensively at branded toothbrushes instead, it's difficult for any half-interested parent to fathom a reasonable excuse for not buying one. 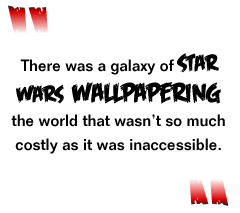 It didn't stop at cheap domestic consumables. There was a galaxy of Star Wars wallpapering the world that wasn't so much costly as it was inaccessible. Official Star Wars posters might as well have been blank when the local library was sporting a huge literary promotion of Yoda holding a book with the simple slogan "Read" underneath. We had to go all the way to the manager of West Yorkshire libraries to bag that beauty, but it was worth the effort.

Bus stops featured film advertisements as tall as I was, and while I'm reluctant to reveal the extent of my criminal activities, my friends and I managed to procure more than few of these amazing works of promotional art. Cardboard cut-outs were looted from bookshops, and terrible lies told to cinema staff to get first dibs on the point-of-purchase marketing detritus that littered the box office.

I knew how people looked at me and my collection, but I wasn't concerned. What I didn't realize at the time, however, was that it wasn't so much my own psychological well-being that was called into question by our small circle of society, but my parents'. That this obsession wasn't curbed or discouraged was a more immediate subject of hushed discussion than an 8-year-old's obscure fixation with collecting cartons and movie-licensed packaging.

As I grew older, I eventually asked that question of myself, though the obsession gradually subsided. By the time the millennium was drawing to a close, people apparently became nostalgic for the Star Wars merchandising phenomenon. The sudden realization that many of these toys - nay, collectables - had actually increased in value was astounding. That childhood toys would become the modern equivalent of collectable antiques wasn't something anyone would have predicted when the Saga was still new. If they had, parents wouldn't have let their kids play with those valuable ornaments in the dirt.