In October of 2007, in honor of Star Wars' 30th anniversary, the space shuttle Discovery carried into space a prop representing the franchise's success; not a Jar Jar Binks tongue lollipop, but the lightsaber used by Mark Hamill in 1983's Return of the Jedi, an icon rich in symbolism. Without its young hero and his lightsaber, Star Wars might have been just another Flash Gordon or Buck Rogers, a tall glass of pulp filled with blasters and space ships, robots and aliens, lacking the central, mythic story arc that made it so memorable.

This was nearly the case.

"When Lucas first thought up the lightsaber, it didn't mean anything," said Michael Kaminski, author of the Secret History of Star Wars. "Flash Gordon used steel swords, and Errol Flynn always dueled with swords in his films, and Lucas was basically emulating this - to give it a futuristic twist, he turned steel swords into laser swords." 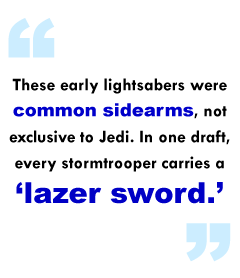 In 2004's Birth of the Lightsaber, George Lucas repeatedly refers to lightsabers as laser swords, and in notes from 1973, he refers to the weapons as "lazer swords" and "thundersabers," the latter calling to mind Thundarr the Barbarian's Sun Sword and Thundercat Lion-O's Sword of Omens. These early lightsabers were common sidearms, not exclusive to Jedi. In one draft, every stormtrooper carries a "lazersword," and in another Han Solo himself - who scoffs at their use in Star Wars - ignites his lightsaber as he charges after a dozen stormtroopers.

It's easy to imagine what this sort of movie would look like - Lucas has shown it to us. In the original trilogy there were a total of four lightsabers (Obi-Wan's, Vader's, Anakin's and Luke's), and every duel involved a symbolic duo - light against dark. But consider the prequels: Darth Maul fights two Jedi; Dooku fights Anakin, Obi-Wan and Yoda; Grievous wields four lightsabers against Obi-Wan; and in the Star Wars Universe's lowest moment, an entire stadium full of Jedi wields a 64-pack of Crayola lightsabers against an army of CGI. Flash Gordon looks positively epic by comparison.

Fortunately, there was a moment when lightsabers escaped pulp and touched the mythic - January 14, 1976.

"In the fourth draft, Lucas had Ben hand [Luke] his father's lightsaber for practical script purposes, to demonstrate to the audience what it actually was and how it worked," said Kaminski. "So now the saber was a sort of family heirloom that is passed down, like Excalibur."

The legend of King Arthur begins when he pulls his father Uther Pendragon's sword (not Excalibur) out of a stone where Merlin had stuck it for safekeeping. After learning his destiny and becoming king, Arthur breaks the sword in a battle against King Pellinore and replaces with a new magic sword called Excalibur, given to him by the Lady of the Lake.