Everything I know I learned from Star Wars.

Let's go down the list. Girls are attracted to the bad boy: check. You'll never get Leia unless you're Han. Even Luke didn't stand a chance, really. Too nice.

Next, good always triumphs over evil: check. Sort of. Evil triumphs a lot, but good always wins in the end. If you rejigger the timelines, anyway.

And lastly, no matter how hard you work, how good you are, somebody, from somewhere, will always try to bring you down. Because the universal consciousness abhors an over-achiever. If you're too good, the bad guys get pissed and go for the jugular. If you switch sides, go with them, not against them, then the good guys get all uppity and put a target on your ass. You can't win. Mediocrity, therefore, is the safe bet. Right, Luke?

I was 2 when the first film came out, but I saw it in the theater. I have no memory of it, but I was there. I saw the next two films when I was in grade school, comparing action figures with the boys, mocking the poor sap who bought his Return of the Jedi T-shirt too early. His said Revenge of the Jedi. What a tool, we thought. He wished he could return it. We laughed. Oh, if only we'd known about eBay in 1983. 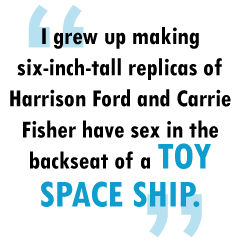 My parents' generation was informed by great and powerful things. By the Cuban Missile Crisis, the Vietnam War, the deaths of John Kennedy, his brother Robert and Martin Luther King. Before them, my grandparents were raised on dirt, suffering through the Great Depression with a grim determination to do it better for their kids. Me? I grew up making six-inch-tall replicas of Harrison Ford and Carrie Fisher have sex in the backseat of a toy space ship. Now I write about games for a living. Perhaps a little struggling is good for the soul. If I have children, they'll eat dirt.

But learning life lessons from Star Wars isn't all bad. Even the games have all taught me something, most of it valuable. My gaming history is etched across the entirety of my 30-something years, and Star Wars, like Forrest Gump, has been there for all of the important parts.

I'm sure the first videogame I played was something classic like Pong, but Star Wars - the vector graphics game in the big cabinet made up to look like the cockpit of an X-Wing fighter - is the one I remember. We had one in the local bowling alley where I hung out with my brother and his friends. We bowled in leagues. We thought this made us cool. I'm pretty sure it didn't, but what the hell did we know? It was the '80s and we played Dungeons & Dragons on Saturday nights. There was a whole world of cool we knew nothing about.