Then again, three years can be an eternity. Three years is more than half a lifetime for a game console, and twice a lifetime for most games. For gaming celebrities, it could be a career. On the internet, it's an epoch.

Three years ago, when The Escapist kicked off with its now legendary Issue 1, I was in the middle of a gaming renaissance. The failure of a long-term relationship had left me with more money and time than I knew how to manage. It also left me, for the first time in years, with a living room all to myself. Memories of games stacked next to the television and controller cords strewn across the carpet came flooding back, and I thought about how nice it might be to get back into gaming. So I bought an Xbox. 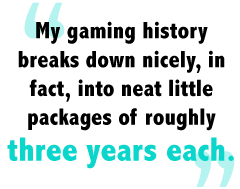 My gaming history breaks down nicely, in fact, into neat little packages of roughly three years each, starting well before the NES (1979 - Fairchild Channel F; 1982 - Atari 2600; 1985 - ColecoVision), but for our purposes the year 1988 is as good a place to start as any.

Like a lot of folks my age, I grew up with a succession of consoles in my bedroom, but Nintendo's little grey box of awesome was the spawn point of such treasured memories as my first The Legend of Zelda speed run and the day I discovered warp pipes in Super Mario Bros. As those memories stacked themselves neatly into the closet and I put away my childish things to become a man, I discovered the fantastic joy of playing games on a PC, where my gaming allegiance rested for over a decade.

Three years after I bought my first PC, the internet exploded, opening entirely new avenues for man-PC interaction and making it nearly impossible for me to step away from the damn thing. From making websites to writing plays to editing videos (and discovering it was really hard to post them on the web), my '90s were defined by the PC. But all those other pursuits were merely hobbies. My PC was made for gaming.

I was of the firm belief that anyone who owned a PC but did not use it to play games was a charlatan, or a freak, or both. I looked down on them the way iPhone owners look down on you, with your flimsy Nokia and lack of awareness of Wi-Fi hotspots and data rates. I collected gaming PCs, built them from scratch and traded them like some people trade Magic cards. Then I accessorized, adding joysticks, driving wheels and flight controls. I bought more presents for my PC than I bought for all of my girlfriends combined, past or present. Naturally, this caused problems.