"Don't go," she said one night as we lay intertwined. Her name is struck from my memory. It was a brief affair; a rebound from an 18-month abstention following the breakup of my first engagement. I'd come to visit her at her place, and now I was leaving. But not for another girl or to head out to a bar with the guys, but to return to my PC and Fallout. 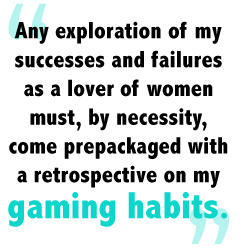 Really, any exploration of my successes and failures as a lover of women must, by necessity, come prepackaged with a retrospective on my gaming habits. I suppose the opposite must also be true.

That relationship didn't last, but I always had the PC. Sometimes it was kept in a closet, to keep the light and noise from waking the sleeping. Sometimes I moved it right into the bedroom to celebrate newfound freedom. But it was always there. Always my consolation, my mentor, my tool of choice for almost any endeavor.

The game industry and I were inseparable in this regard. Year after year we have been one, like the king and the land. And every three years we take stock and find something has changed.

In 1993, Myst blew open the doors of computer gaming. Originally developed for the Mac, it was quickly ported to PC where it became a blockbuster hit. Today you can even get a version of the game for the Nintendo DS, but I'd recommend against it. I played Myst a year after it came out and it completely absorbed three days of my life. I'm sure I ate and slept during that time, but I don't remember doing so. All I remember is Myst.

It was unlike anything that had come before, weaving video almost seamlessly into a beautifully rendered world, presenting a captivating landscape filled with puzzles and mystery. In a game market dominated by Doom clones and simulators, Myst took us by the hand and showed us the future of gaming. It took almost a decade for anyone to follow its lead.

Three years later, in 1996, John Romero (and crew) made us his bitch for the second time, with Quake. During the heyday of AOL chat rooms and personal websites decorated with animated GIFs of cats, Quake knocked on the door of the internet and said, "Hello, this space has been reserved for gaming. Suck it down."

Deathmatch entered the cultural lexicon and I lost entire weeks of my life pinging open servers, looking for the fastest game of Quake. I vividly remember the smell of a forgotten, white-hot pan burning on my stove as the water I was boiling to prepare macaroni and cheese completely evaporated over the course of an hour while I gleefully played Quake in the next room.

I didn't have much of a life then. I'd broken up with my fiancée, had a part-time job and was supposed to be writing a play, but I wasn't. Instead, I was playing Quake. Gaming and I were both in our twenties: exuberant, irreverent and brash, just starting to realize we needed a plan, but with no idea how to make one.