On that front, the PlayStation and the N64 were bringing 3-D gaming to televisions, where gaming was taking hold with a new generation of gamers who'd never touched a PC in their lives. Some said there'd be a convergence soon. The industry and I, in our PC-centric cocoon, laughed. "Pass me another video card," we said, cackling. "We can probably stack two of these together. Think of the polygons!"

On the console front, the Dreamcast launched in the U.S. and the PlayStation 2 followed the year after. All signs indicated a new era for gaming was on its way; an era of big money and high stakes, and the old rivalries were brought to a boil. PC gamers and fans of each of the three big console makers (Nintendo, Sega and Sony) all jockeyed for position to see who'd end up on top, standing their rivals in the corner and twisting their nipples until they cried uncle. 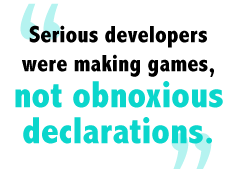 1999 was also the year the brash, exuberant adolescents got a bloody nose. Daikatana wasn't the first game to suffer from the obnoxious optimism of big-mouthed developers with no business savvy - nor will it be the last - but it was the most high profile and unexpected. Daikatana, Ion Storm's much-hyped first-person shooter, launched in 2000, but by that point no one cared. Serious developers were making games, not obnoxious declarations. Serious developers didn't take over three years to make a game. Ion Storm wasn't serious - now they're gone.

A strange consequence of this trend toward seriousness was that I became serious, too. Too serious to play games. I was an adult, with adult responsibilities. I had a live-in girlfriend, a company of my own and a dog. My game time dwindled to late nights and long weekends, and the increasingly serious games, made by serious people with serious money, left me behind. I couldn't keep up. My interest waned.

I started looking for games I could play in my limited spare time, maybe away from the computer where I spent most of my long days. I wished the awesome of PC gaming could be transferred to my sofa. I wasn't the only one. In 2001, Microsoft launched the Xbox.

For all intents and purposes, the original Xbox was a PC connected to a TV. Granted, by the time you got one in your hands, hardware available for the PC had left the Xbox's technical prowess in the dust; and by the time I got my hands on one, it was a joke. But it was a shot across the bow of the old-school console market, and PC game developers reacted in shock, defecting one-by-one.