This is not the space to argue one console against another. Each has its strengths and weaknesses, and each has its fans. I will not attempt to sway you one way or another. But for the current crop I will say this: both the PS3 and Xbox 360 are more like PCs than any console ever made, and the games being made for them rival anything I ever played on a PC.

When the Xbox launched, it signaled the beginning of the end of any meaningful PC vs. console debate. Granted, the PC is still home to raw power, customization and intricate user interfaces, and most of that first generation of Xbox games were PC ports. In terms of gameplay, however, the line was beginning to blur. A fact I realized as soon as I broke down and gave the Xbox a shot, three years after its release. 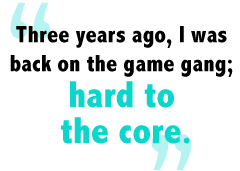 The next generation came a year later. That was three years ago.

Three years ago, I was back on the game gang; hard to the core. I worked a 60 hour a week job, came home and played games. My various consoles were the centerpieces of my entertainment center. I spent more money on new games than on any other single category of goods, and, apart from work materials, I spent more time reading games-related magazines and websites than anything else. I even wrote about games and produced a gaming podcast.

In 2005, games were the center of my universe, and I was in the blazing hot molten core of the game revolution, which, in turn, was soaring like a rocket ship to the heart of the entertainment industry nebula.

The Escapist launched that year to bring high-brow, magazine-style games writing to the internet. Microsoft launched their Xbox follow-up, while Sony polished their PS3 and Nintendo promised to take gaming in a whole new direction,. And now, three years later, here we are. The Xbox 360 and the PS3 have brought honest-to-Vishnu PC-style gaming to consoles, and the Wii is appearing on the Today show in nursing homes and veterans hospitals.

For my part, I still play games, but not as much. I love a good AAA title, built by serious people with serious money, but I'm just as apt to pick up a casual game (on the console or PC) and spend a few minutes bouncing balls around or planting a virtual garden between meetings. The industry and I have both grown up, and grown tolerant of all platforms and preferences. And we're both bigger than ever.

This year, gaming surpassed Hollywood in dollars spent, and for the first time ever, a major game release (GTA4) caused the movie execs to sweat, wondering if it would keep moviegoers at home. For my part, I've been part of the team here at The Escapist for the past two years, where we've blown the doors off the old style of game journalism, created a media powerhouse and launched the most visible video series on the internet. Not bad for three years work. I wonder what the next three years will bring.

Russ Pitts now has dreams about the number three. His blog can be found at www.falsegravity.com