For those of you who found this page through Google, sorry to disappoint. No man love here. And if you're a regular of the site ... well, you should know better. But as long as I have your attention, let's talk about what's on everybody's mind: sex. Specifically, what sex is going to become.

Sex has remained generally unchanged since cavemen were humping in, well, caves. (They apparently enjoyed it.) Up until about 20 years ago, sexual encounters were generally between two (or more) people in a private setting. Then the internet came, and the floodgates opened. With the wide availability of advice, diagrams, cell phones and instant messenger programs, our ideas about sex have become more fluid than ever. We no longer need to suppress our passions, fetishes or dirty thoughts; we now have plenty of outlets to nurture and share them with others. 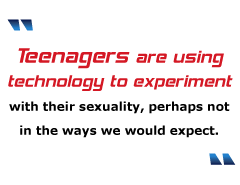 Before the internet, the closest we had to dirty communication was phone sex. While still practiced today, it's quickly being supplanted by IM chatting and roleplaying. And this digital foreplay isn't just a pastime for adults, either: Teenagers are using technology to experiment with their sexuality, perhaps not in the ways we would expect.

In the last few years, the practice of "sexting," where girls or boys takes nude photos of themselves and text them to their significant others, has become more prevalent. Many times these photos find their way onto the web, where the genie can't be forced back into the bottle. Vanessa Hudgens, teen star of High School Musical, discovered this unfortunate fact when photos of her in lingerie and in the nude appeared all over the internet, enveloping her in a scandal. While it's unknown whether she was "sexting" anyone, she certainly didn't keep them to herself.

Celebrities aren't the only ones who can find themselves subject to unwanted attention, Last year, a single photo transformed high school pole vaulter Allison Stokke into an internet sensation, causing no amount of consternation and stress for the young athlete. Stokke shrank from the attention, garnering a great deal of sympathy from everyone who thought the drooling, anonymous male masses were more than a little creepy.

Whereas the stupid crap we all did when we were kids was previously the quiet shame of a hangover, ubiquitous camera phones have made stupidity a spectator sport. Embarrassing and/or revealing photos from MySpace, Bebo and Facebook now make their rounds from friend to friend and blog to blog almost instantaneously. I personally have about a dozen video clips of friends and acquaintances doing things that are not only stupid, but illegal. Lucky for them I'm not a giggling teenager; but it only takes one indiscretion for private mistakes to become public ones.

One could argue that much of this could be alleviated by more tech-savvy parents, or by more parental involvement in general, but we shouldn't be so dismissive. A recent Rasmussen poll showed that 49 percent of Americans are in favor of a government body like the FCC regulating the internet. (Somewhat schizophrenically, another recent poll showed that 70 percent of Americans are "concerned about providers blocking or impairing their access to internet services or sites.") While any such attempt to regulate the internet would be futile - and almost certainly unconstitutional - it's troubling that such a high number of people are willing to bow to governmental censorship.