Of course, what happens to the internet - and, by extension, online gaming - happens to gaming at large as well. With the game industry's already tempestuous relationship with politicians, adding in the number one American hang-up - sex - could cause the Capitol Building to implode like a collapsing star. One need only look back to the explosive fallout from Rockstar Games' "Hot Coffee" scandal to see the reaction that sex in games can provoke. 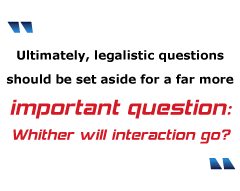 But ultimately, legalistic questions should be set aside for a far more important question: Whither will interaction go? There's already a great number of people who say the internet is undermining meaningful social interactions - everyone and no one is a "friend." One of the first studies on the impact of the internet on interpersonal relationships was in 1998, concluding that "greater use of the internet was associated with declines in participants' communication with family members in the household, declines in the size of their social circle, and increases in their depression and loneliness."

However, a Carnegie Mellon meta-analysis of these kinds of studies from 1995 to 2003 "suggest[ed] that more internet use leads to a slight increase in interactions with friends." The researchers explain this by saying that "the internet might reduce the costs and increase the convenience of communicating with friends, and in doing so, make other types of social interaction, such as phone calls or spontaneous outings, more likely."

Indeed, perhaps the increasing use of the internet and more progressive attitudes about sex (likely prompted in part by the wide availability of online information on sexuality) are allowing people to be more comfortable with their own desires - or at least more willing to explore them. In 2005, the CDC's National Center for Health Statistics reported that more women are experimenting with bisexuality, with 11.5 percent reporting "at least one sexual experience with another women" compared to only 4 percent a decade prior.

While dire news for any organization with the word "family" in its title (see: Family Research Council, American Family Association, Focus on the Family, etc.), I feel this is a positive development in our society. Americans are often so wound up about sex that they can't see the forest for the trees. Several countries are still in the habit of torturing and killing women for daring to express their sexuality (or, even worse, for being raped). And next to those of some Middle Eastern countries, American attitudes about homosexuality are enlightened by comparison.

I'm not here to stand on a soapbox, but the issue of sexuality and how we connect with each other in this increasingly wired world is important, and it's not going away. Best to be thinking about it now.

In the meantime, I'm going on ALT.com to see exactly what "fire play" is and if I wouldn't mind experiencing that type of burning sensation.

Tom Rhodes is a writer and filmmaker currently living in Ohio. He reminds you to always be safe and use a condom, and can be reached through Tom [dot] Rhod [at] gmail [dot] com