There is a clarion call that has been building in the voice of game developers in recent years. They claim that piracy is laying waste to their livelihoods and costing them billions in sales. It's the same banner to which software developers, record labels and movie studios have been flocking for the past decade or so. They insist they're merely defending the rights of the developers and artists to get paid, and that continuing to support piracy is not only illegal, it also robs the very people whose products we enjoy.

Fair arguments, I'm sure, but I want to introduce you to an entirely different perspective: Piracy supports an underground economy and the livelihoods of thousands of people in Asia, especially in countries where most people live below the poverty line. This underground exists primarily because its participants cannot afford the exorbitant prices charged by game publishers. It's a point of view that isn't often raised in American or "industrialized" media, but it's easy to miss when you aren't surrounded by piracy on a daily basis. 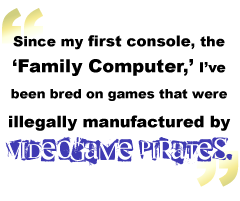 Welcome to the developing world
I was born into videogame piracy. Ever since my first console, the "Family Computer," I've been bred on games that were illegally manufactured by videogame pirates. In fact, I had no inkling of video game piracy until late into the PS1's life cycle, when I first spotted a legitimate copy of a game in a store window and made some curious inquiries. By that point, it was too late; I'd collected hundreds of pirated games, many of them from my favorite pirate company, Players. (They had rather aptly pirated the logo of the Indiana Pacers and ingeniously replaced the team's name with their own.) Still, I resolved to do the right thing. I believed in people getting paid for what they created, and I loved the games that these companies developed. So I walked into a store that sold original games and nearly had a heart attack after finding out how much they were really worth. Original PS1 games at the time cost almost 30 times as much as a pirated copy! Imagine how you'd feel if, for your whole life, you bought games for a dollar apiece, then suddenly found out they actually cost $30. Like many a Filipino gamer, I couldn't afford it, but I sure as hell wasn't going to stop playing games. I just went back to the pirates.

That was many years ago, and unfortunately things haven't changed much. I'm now personally involved in the videogame industry, so my views on piracy have altered somewhat. But it doesn't change the fact that the majority of Filipinos and other people in the region continue to buy pirated games simply because 1) It's all they've known, and 2) Even if they knew better, they simply cannot afford original games. Publishers and console manufacturers like Nintendo are convinced that once they stop piracy, the money from all those lost sales will suddenly come flowing into their coffers. For whatever reason they never take into account their prospective market's spending ability. Thus, an underground economy has been built around the needs of the low-income Asian gamer to help them support their addiction. It's not hard to relate: If you had $300 a month to spend on rent, food and all of your other expenses, how high would a $60 game be on your list?