Looking back at my childhood, I remember two things: having an unlimited, uninhibited imagination and thinking that guns were awesome.

I'd spend hours daydreaming - drawing and writing stories about imaginary creatures and worlds I invented out of thin air. I couldn't take a breath without some absurd creation popping into my mind, begging to be smudged into life via crayons and a piece of paper. At the same time, like many boys, I discovered an ability to turn any appropriately shaped piece of wood, kitchen utensil or cardboard tube into an imaginary gun. I couldn't walk through a forest without mentally reconfiguring at least one branch into a laser rifle I could use to destroy some evil alien monster or, more often, my younger brother.

I'm 30 now, don't have time to daydream much and haven't wielded a twig like a pistol for many years. But I was reminded of those childhood feelings when I played two videogames recently: Super Mario Galaxy and Gears of War. 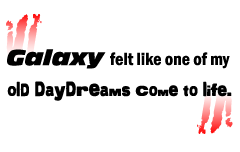 From its opening flashes of color and familiar setting, Super Mario Galaxy made me experience all the wonder of being a kid again. Like previous Super Mario games I played when I was younger, Galaxy felt like one of my old daydreams come to life. I loved it. Gears of War made me feel like a kid again, too, but in a different way. I'm sure my younger self would have thought its ridiculously proportioned action heroes and "kill 'em all" gameplay was fantastic, but my grown-up self found it immature and embarrassing. I hated it.

Galaxy made me feel childlike, but Gears just felt childish. Had something changed in me? Virtual slaughter could have once been called a forte of mine. I grew up fragging hellspawn and Nazis in the gloomy corridors of Doom and Wolfenstein as much as I did bouncing through the sunshine and rainbows of the Super Mario games. Why had I outgrown one kind of game and not the other?

Gaming makes for some strange scenarios, and playing Super Mario Galaxy is no different. Picture me, a 30-year-old male sitting in the basement of a house in a northern Canadian town, pretending to be a mustachioed Italian plumber saving a race of mushroom people from an evil turtle by chasing bunnies, floating in bubbles and cleaning a giant bumblebee. In 99 percent of the years humankind has spent on this earth, society would have considered me an absolute lunatic.

In this era, lucky for me, I'm just another run-of-the-mill gamer, part of a demographic that is comfortable spending significant amounts of our recreation time pretending we're still children. We're cool with that. We're used to hearing people say "I feel like a kid again" in a purely positive way. For us, childhood is all about cuteness, innocence and simple, unpretentious joy. We selectively forget the other major attributes of childhood; namely, the lack of common sense and abundance of aggression. And that's where Gears of War comes in.