That's the mistake most players make upon first loading up The Marriage, the first widely released artgame by Rod Humble. In Humble's minimalist, abstract exploration of relationship dynamics, even the seemingly innocuous act of clicking the left mouse button forcibly restarts the game. As is the case with so many aspects of Humble's games, the "don't click" rule first causes irritation, then confusion and, finally, acceptance (probably followed by a second, much more subtle confusion).

Humble, who paradoxically served as Head of Sims Studio, the developer of one of the best-selling games in history, has released two incredibly subversive artgames over the last 18 months: The Marriage and Stars Over Half Moon Bay. Even among the rarified collective of artgame designers attempting to convey meaningful ideas through play, Humble's predilection for portraying incredibly complex ideas solely through game rules stands out. 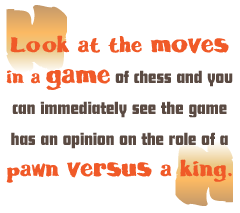 "Structural expressionism was at the center of Stars Over Half Moon Bay and The Marriage," Humble says. "The structure and the games' rules themselves express something. This isn't a new way of thinking; look at the moves in a game of chess and you can immediately see the game has an opinion on the role of a pawn versus a king. Indeed, a king's move in chess is familiar to every high level business executive in the world: You have infinite power, you cannot be defeated directly but you are slow, must work through your organization and the only way you are defeated is if your room for maneuver is reduced to nothing."

Although several other artgame developers have attempted to convey themes and metaphors through game mechanics, Humble is the only such designer to try and put forth these ideas using gameplay alone - his aesthetics are as bare-bones as they can possibly get without being absent or completely incomprehensible. As a result, The Marriage and Stars Over Half Moon Bay lack those moments of instantaneous understanding found in later artgames, like the death of the player's spouse in Jason Rohrer's Passage or the final level of Jonathan Blow's Braid. With those games, the player's enjoyment and intellectual understanding are derived from a single instant of revelation - Rohrer calls it the "a-ha moment." By contrast, Humble's work is far more enigmatic in almost every conceivable way. Both of Humble's artgames include simplistic, abstract graphics consisting almost solely of geometric shapes, and it was only after a considerable amount of hand-wringing that Humble added musical accompaniment of any sort to Stars Over Half Moon Bay. While Rohrer's Passage seeks to engage the player's sense of empathy through simplistic (but immediately recognizable) character designs, Humble is happy to leave the husband and wife of the titular marriage as blue and pink squares; the gameplay itself is meant to convey as much of the metaphor as possible.

While not as mechanically complex as Stars Over Half Moon Bay, The Marriage is perhaps the best distillation of this design philosophy in Humble's resume - heck, in games as a medium. And yet, less than a paragraph into the creator's introductory statement to The Marriage, he acknowledges the game as a failure.