Along with my business partner Shawn Andrich, I am one of the co-founders of the videogame website Gamerswithjobs.com.

It is realistic to expect that you have no idea what that is or who I am. Frankly, I am agog whenever I find someone who does know.

Gamerswithjobs, or GWJ as it is more affectionately known, is an effort now five years old; a gaming commentary/review community blog that we built on the ever-changing principle of launching the site we had always wanted to visit. We committed ourselves publicly to integrity, high standards of quality, depth of analysis and a constant flow of content. Privately, I suspect we were just trying to justify our unhealthy obsession with videogames.

Launched three months before Kotaku, a year before Joystiq and a full two years before the venerable Escapist, we are something of the Old Man of gaming sites. This is in part because five years in the online space is an eternity, and partly because several of us are in our 30s and 40s. We have a gaggle of writers who have written for places like 1up.com, EGM, the now tragically defunct Games For Windows magazine and even one guy who abandoned us to be an editor for the very site you are reading now. 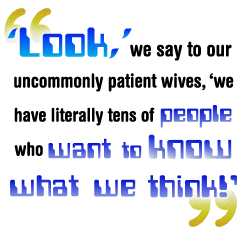 Despite our persistent obscurity, we have managed to accomplish our primary goal of GWJ, which is simply to perpetrate an excuse for refusing to grow up and stop playing these silly games. "Look," we say to our uncommonly patient wives, "we have literally tens of people who want to know what we think!"

This is, of course a lie.

The Trouble With Tribulations
I think there are three absolute requirements to starting a videogame website.

Launching a site with big aspirations demands a certain degree of audacity and skin thicker than Uwe Boll's skull. It's easy to be discouraged at every stage of running an independent site. Building traffic is a headache matched only by the headache of dealing with the traffic you've already built. When you fail, you are only living up to expectations, and when you succeed, you are often marginalized by much larger sites that co-opt your words for their own.

Let me provide a healthy example, one of a thousand that spring to mind. You may recall during the development of Half-Life 2 that some very sensitive code was stolen right from under the nose of Valve. GWJ was the site that broke that story.

You probably didn't know that. Here's why.

Letters to the Editor: Paid to Play The Escapist Staff 0 Comments

How To Get Into Game Journalism: Xfire Chat Russ Pitts 1 Comment