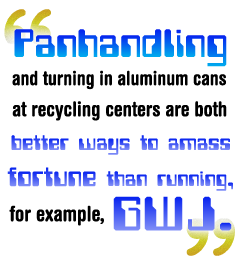 Here's a tip: If you're looking to get rich, don't go into the wonderful world of independent videogame journalism. I kid you not when I suggest that panhandling and turning in aluminum cans at recycling centers are both better ways to amass fortune than running, for example, GWJ. If I were to dramatically overestimate the amount of money I've earned running the site and dramatically underestimate the number of hours I've spent on it, I nonetheless arrive at an hourly wage well under a dollar an hour. Very good if I'm looking to retire in a third world country, but very poor if I plan to eat.

Running GWJ for me is a worthwhile endeavor for its own sake. I realize this may sound patently snobbish, and maybe that's part of the site's milieu. We have that same occasionally combative nature toward mainstream gaming that unsigned independent bands have toward the big labels. I'd love to say that the beauty of GWJ is that we refuse to sell out, but sometimes I wonder if it's just because nobody's made us an offer.

Up With People
In the end, there's really only one thing that fires me up about helping to run an independent site in this age of blogs and wikis and twitters (oh my!), and it has very little to do with hobnobbing with gaming big-shots, scoring free games from PR companies or raking in mad cash from Puzzle Pirates ads. At the risk of sounding maudlin, it's all about the people.

When we launched with that vision of being the site we had always wanted to visit, what we pictured was a community. I could describe that vision to you, but frankly the picture of our current community is worth far more than the words it would take to describe it. GWJ was the platform that Shawn Andrich and I used to find like-minded people. Some people find communities in forums, others in games. We just took the "Field of Dreams" approach, built our own website and waited until people walked out of the Iowa corn. In this particular analogy, said Iowa corn is best represented by Google, but just go with me.

The real benefit of building and maintaining our site isn't really the excuse to play games, or the income which I presume someone with far better business skills would be able to amass. It's sitting down at E3 with Bill Harris and Russ Pitts for one of my all-time favorite lunches. It's chatting with people like Ken Levine or Brian Reynolds and finding out that they're just gamers with jobs. It's organizing a get-together of the site's community and meeting people who were theretofore just words on a screen. It's opening a magazine and seeing names like Lara Crigger's in print, knowing some part of what I did helped them launch their writing careers.

From our readers, to our contributors, to the everyone who has donated their time and energy to helping the site succeed, they are the high-octane fuel that keeps me going. Without them, I'd just be a guy who thinks far too much about videogames.