I thought it would be different. We had an Organized Play guy at White Wolf Game Studio whose job consisted, in part, of arranging tournament events all over the world for the Vampire collectible card game. He'd be gone for weeks at a time, living off his per diem, refereeing official tournaments with cash prizes and drinking scotch instead of eating food. He came back one time with a decorative mirror from Romania, painted with a vampire theme as I recall, and a T-shirt that said "Never Leave Hungary." That's what I thought it would be like to play games for money. 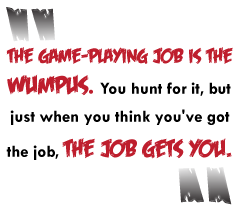 The truth is something else. The game-playing job is the Wumpus. You hunt for it, but just when you think you've got the job, the job gets you.

When you're working as a pen and paper RPG developer, very little of your time is spent actually playing the game. The work of getting a game out the door eats up any potential play time - and sometimes the desire to spend more time with the game at all. Getting people at my old haunt to actually play the games we made was like getting kids to eat their vegetables.

My job as a developer wasn't to play the game, but to produce books. I spent my time editing text and devising new gameplay elements. Play testing was the job of writers' gaming groups and dedicated civilian play testers. My weekly game night was preempted every other week by deadline-induced panic.

Things were not always thus. Every summer for eight years, I went to the Gen Con game convention. I paid my own way exactly one time. The last few years, I went as a staffer for one game company or another. At the turn of the century, I went as a "demo monkey" - one of the plainclothes volunteers who runs demonstrations of games at a convention in exchange for a badge and maybe a hotel room - for the largest of the hobby-game companies, Wizards of the Coast.

I was given a hotel room to share with three other guys. I slept curled up on the floor or in the bathtub with my feet propped up, afraid to share a bed with the strangers I got lumped in with. I didn't appreciate that, back then especially, I was a strange dude, too.

I had actually volunteered to run Star Trek roleplaying game demos for Last Unicorn Games, but they had been bought out by Wizards of the Coast shortly before the convention, so we, the demo monkeys, were being put up at the show with Wizards' money. The number of demos was remarkable. Wizards of the Coast seemed dedicated to promoting their newly acquired Star Trek games, having set up half a ballroom with five or six demo tables, each one packed with players for each four-hour game session.

As a demo monkey, your actual job is to sell games by playing them. Sort of. The dealer at your casino poker table isn't playing cards; she's working. It's like that. We monkeys were putting on a show, two or three shows a day, for four days.

More than the other demo monkeys, I think, I was into the "art" of running the games - concerned with immersion and narrative structure and character details. It was pretentious, sure, but I wanted to run memorable sessions. I didn't want to be that guy who's doing the demo spiel but looking over your head at the passersby for someone better to talk to. I thought, like a desperate off-off-Broadway actor, that I might get discovered if I put on a good performance. As if some game company scout would notice me and say, "Son, you've got a lot of talent. Come and work for us!" But the game pros seldom came down to the demo room, and when they did, they didn't stay for long.