The trick to selling a game - especially an RPG - is to give the audience what it wants. If your players talk in character, so do you. If they want to fire phasers at every moral dilemma they see, give them things to shoot at. If they want to partake in a three-hour farce of Klingon comedy antics, you make the best bat'leth and blood-wine jokes you can manage. ("I know a Federation codeword that'll get us what we want: 'Please!'") 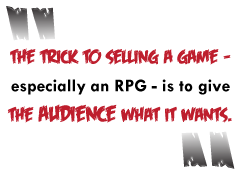 The morning of the second-to-last day of the show, flyers started circulating around the exhibit hall. They were coming out of the Decipher company booth, but somebody had left a stack of them in our demo room, too. Bright yellow things loaded with press-release text and exclamation points. They reported that the Star Trek license had been pulled from Wizards of the Coast following the Last Unicorn buyout and handed over to Decipher, who produced the Star Trek CCG at the time. Decipher was letting people know they shouldn't get attached to the current game - and probably shouldn't be buying the rulebooks for a line that was about to die.

What were we selling the games for, then?

We decided to hijack the tables we'd been given to run. We were going to steal the time we had to work with and blow it on playtime. We took the stock scenarios and rigged them to pay out for us.

That night, we stayed up in the empty game room planning our heist. We developed a timetable, so we'd each know where we had to be at what time, and set the coffee timer I'd borrowed from my day job at Starbucks to beep at key moments to help us stay synchronized. We prepared a few simple gestures to use as secret signs so we demo monkeys could communicate without the ticket-holders knowing what was up.

The next morning, we walked in as a crew, practically in slow motion, like tuxedoed thieves on the way to pull off a job. Plenty of people, not having heard the news about the license-pull or perhaps not caring, had showed up to play Starfleet officers and Klingon starship crews. We fanned out, took our places at our designated tables, silently made eye contact with each other, one by one, and exchanged knowing nods. I held up the coffee timer and thumbed the button. The countdown started.

For the first hour, we ran our games as usual, teaching the rules and getting players into character. When the timer went off, we started our real game: merging all the demo tables into one epic Star Trek experience. When the Starfleet ship from the Next Generation era encountered a time-displaced ship from the Kirk era, each ship was crewed by players at a different table in the demo room. When the Klingons showed up, they were played by the folks at that table in the back. We had five narrators working together to build a single, massively multiplayer experience in pen and paper play. Some of it was PVP, some of it PVE, all of it hectic and enthusiastic. The players loved it, sloppy though the story was, full of time vortices and omnipotent aliens and technobabble bullshit.